The thing that most unsettles me about Shoe is of course its occasional portrayal of “sexy” lady birds, but the “goggle-eyed look of horror reaction shot” is a close second, especially since the punchlines in this strip are generally good-natured jokes about everyday life and not, say, an announcement of existential crisis. For instance, going by today’s text alone, I’d guess that this is supposed to be some wry commentary on how low the resale value is for all those expensive consumer goods we buy, and what’reyagonnado, amiright? But the way that our two characters are looking at each other in undisguised shock in the final panel implies that this sale of the Perfesser’s possessions was a last-ditch effort to raise funds that they desperately needed, and that the bad men will be coming to cut off their thumbs shortly. 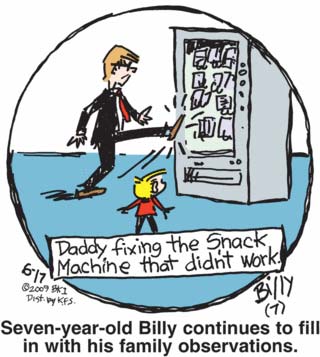 Wow, this week’s “Little Billy, Age 7” cartoons sure are extra harrowing, aren’t they? I have no idea where Big Daddy Keane’s day job is supposed to be or why Billy is there with him, but the meaning of his display of violence is fairly clear. “See what I did to the machine, when it didn’t give me the bag of Funyuns that I paid for? Well, just think of what I’m going to do to you and your sister and your idiot brother if I don’t get the [kick] God [kick] damned [kick] peace and quiet [kick] I deserve [kick] once in a while!”

Ah, a mother’s love! It encourages us to speak in the sweet, comforting voice of LIES. Really, Sally, if Hillary always “do[es] great” on her finals, then why, after 27 years, has she still not advanced to the sixth grade? 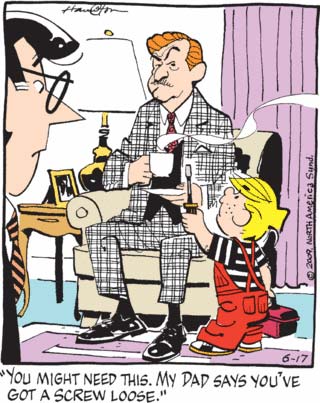 “So I thought you might want to stab him with this, to teach him not to shoot off his big mouth.”