Your comments of the week momentarily, but first, some items! I wish to begin by pointing your attention to the New Yorker Cartoon Lounge’s take on the upcoming Archie nuptials. It made me laugh! Is this how William Shawn and Dorothy Parker would have wanted this beloved publication to enter the Internet age? Probably!

Next, I present the final rounds of what would Margo Do bracelet pics! First up is from faithful reader Alfred E. Newman. “I got my wife to photograph me during my daily Pledge of Allegiance to the Comics Curmudgeon!” 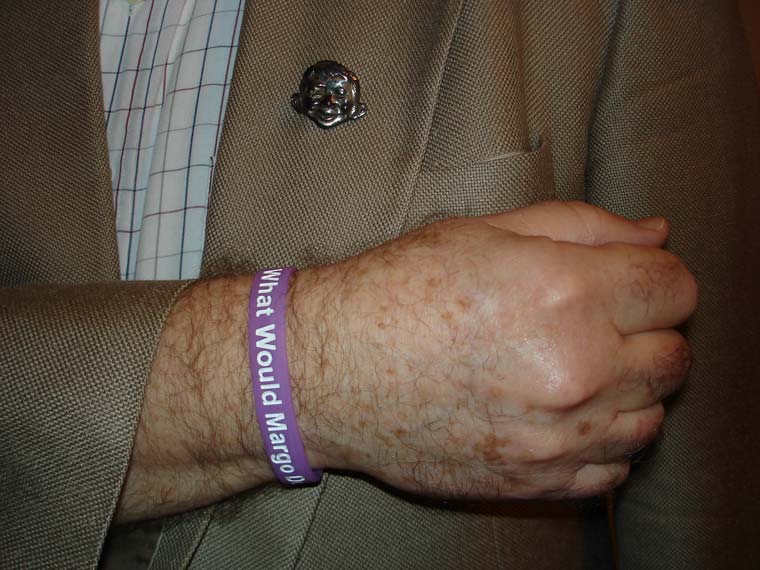 Next comes a pic from faithful reader the Ridger. “I’ve often thought that Margo’s favorite superhero would be Buttercup, the amazingly mean Powerpuff Girl. Also, that Buttercup might love Margo.” 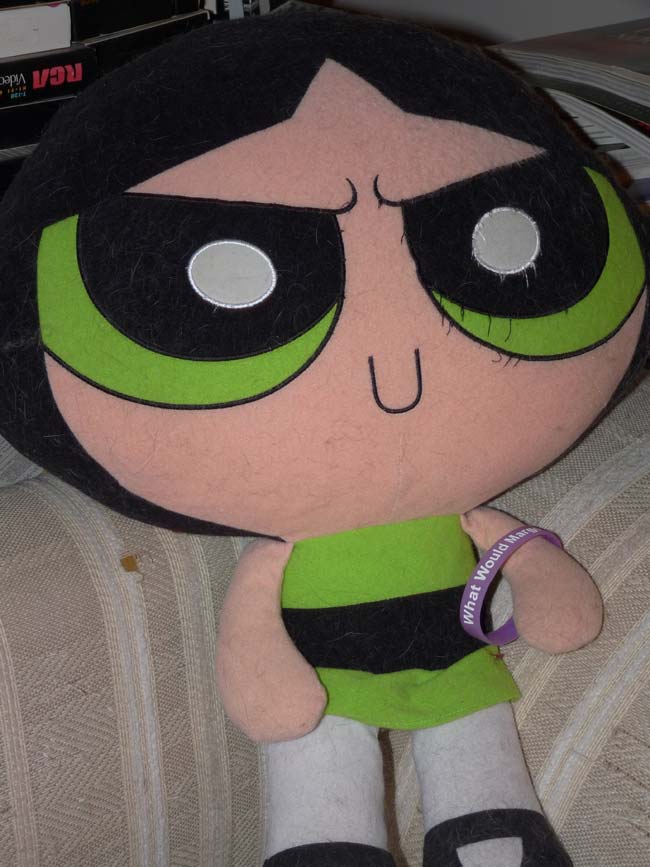 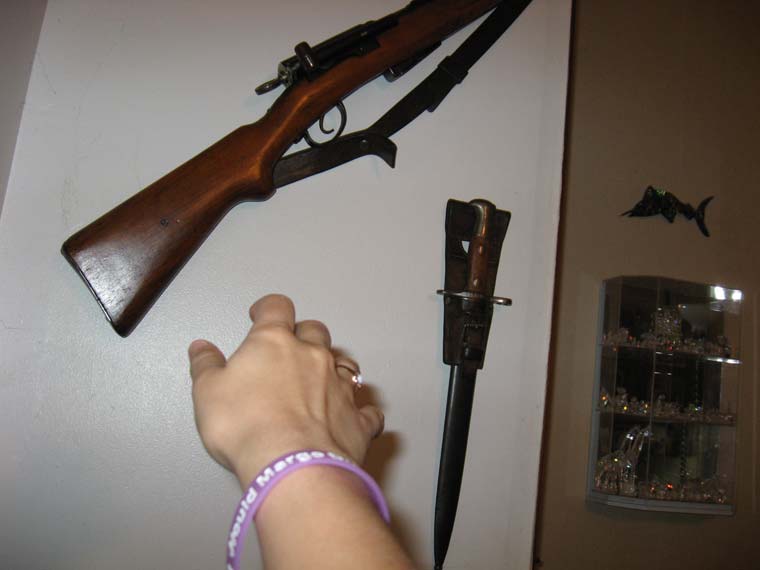 “I wonder if it would be possible to reproduce the ‘This is MY crib!’ panel of Rex Morgan in the form of a welcome mat. I wonder about it a lot.” –peabody

“9CL: Edda’s friend understands that by asking for mime and making bland, encouraging comments, she can get Edda to shut up. She’s not even really looking. ‘Jeepers’ is what you throw into a conversation when you’re tying to pass the Turing Test as lazily as possible.” –Les of the Jungle Patrol

“In panel two, I am fairly sure that Lisa’s ghost is near a bush, watching to see if Les does, indeed, spread the jelly right to the edge.” –Comics Fan

“I can see why Cherry decided to stay home if Mark’s idea of an enjoyable vacation involves being beaten unconscious.” –Darkefang

“You see, Kayla, the one time Lisa didn’t spread the jelly all the way to the edge she ended up pregnant and then dead. How sad if that were to happen to you.” –Gary

“I think Tommie’s wistful sigh in panel three is indicative of the thought process, ‘I would give anything to upgrade my emotional status to lonely and unloved.'” –Violet

“Moments after the picture was taken, this plugger ate his own overalls.” –One-eyed Wolfdog

“Poor unemployed Bob relies on fish caught from a swamp to feed his family. Now Mark brings Rusty to the swamp to (1) catch the fish that Bob otherwise would eat, (2) derail Bob’s only opportunity to earn some money by joining the poachers, and (3) eliminate poaching, thereby allowing the population of alligators to explode and the population of fish to vanish. Thanks a heap, Mark! Now, why don’t you and Rusty come over to Bob’s cabin, eat a heaping meal to clean out his meager pantry, and then molest his daughter.” –seismic-2

“That’s weird. Pluggers generally has nothing to do with the species of its title characters, who usually seem to be fired theme-park workers who couldn’t get out of the costume.” –Artist formerly known as Ben

“Does it make me weird that I’m way more terrified of the thought of grody, gut-length old-man beards than some horrific goat-human-demon hybrid? I don’t think so. I think it only means I’m more aware of how microbial pandemics work than most people.” –Alan’s Addiction

“Billy isn’t wrong in his math. There can be only one driver’s license in the Keane family (no women need apply, naturally), and it’s that many days until the ritual death by stoning of Daddy Bil.” –Steve S

“Too bad I didn’t adopt Margo as a role model decades ago. I’d either be president of a television network or, perhaps, in jail.” –ladadog

“Dude, Tommy is blissed-the-fuck-out. Thankfully, I don’t remember the age when sitting in a literally steaming dump was so satisfying, but … he makes a compelling case.” –teddytoad

“Seeing as how the hospital parking lot is filled with nothing but hearses, I’d say Scott’s chances probably aren’t fantastic.” –it’s time to pay the price

“I comforted many violent crime victims’ families over the years! Now I’m on the other side! I’ll be the one committing the violent crime! These claw-like fingernails are the only lethal weapon I need!” –Nekrotzar

“Not content with pioneering the concept of a couch potato hero, this strip now shows us a couch potato villain. When they meet for their battle, what will they fight over? The remote?” –Larry Fine

“Look at how sinister Crock looks in the first panel. It’s like he’s tainted the food with some kind of incredibly painful stomach flu and is taunting his poor elderly mother over the phone about it. ‘How was the food on your senior cruise, MOM?? Enjoying the bloody diarrhea? Hahaha! That’s for birthing me in to this ill-begotten universe of scribbles, you dried up old bag!'” –zamros

“Oh, I pray that Scott’s going to be all right. If only it hadn’t taken three whole days to get through these doors, we might already know!” –Black Drazon

“Crock is perfect for people who love fort-based humor but can’t follow the convoluted plots of F-Troop and can’t grasp the character nuances of Walker, Texas Ranger.” –Ed Dravecky

“Bounced checks aside, it looks like Ted’s investment in mood-altering drugs was a good one.” –NoahSnark

“I take comfort in the fact that, no matter what the plot happens to be, the artists responsible for Mary Worth will take the time to lovingly render a drop ceiling in at least one panel.” –Patrick

“MW: Now, I’m no doctor, but I always figured an arm sling was specifically to help keep the arm lightly in place while sitting or walking or being, you know, upright in some way. A sling does no good on a patient who is laying down. It’s true! Try it yourself! It offers no support; it will just hang limply if you are laying down, which is probably something Mary and Jeff are intimately familiar with OH GOD WHY DID I JUST GO THERE” –Sheila Sternwell

“I can’t wait til we get to Bobbie’s Big Reveal, when she yanks the blond wig off and it’s the bald guy who’s been scarin’ the oldsters in Rex. Or the bald guy from the Mary Worth shootout. What I’m saying is … the chick’s a dude, man, and I don’t think he’s got no hair.” –MolyBendum

“I love Doctor Whositz. Especially the episodes where he battles the Dalekmacallits.” –Ringo Beaumont III

“Silly Josh, Ted already owns the Star Wars holiday special. The money is going towards bribing Lucasfilm to allow the special’s characters to be released as action figures. Ted will never be happy without a plastic Bea Arthur singing bartender in his collection.” –McPerson