Maybe it’s because I’m not in charge of a tiny human who will be pooping in his or her pants for the next couple of years, but there’s something I find fairly unpleasant about seeing a little baby thought-ballooning “A bathtub is bigger than a toilet!” I mean, yes, it’s possible that we’re just seeing the development of Trixie’s basic understanding of how objects can be related to each other in terms of size, but something about her cheerfulness, combined with her well-known diaper problems, just screams “that bathtub is full of poop!” to me.

Also worthy of note is the fact that the Flagstons, like the Bumsteads, have an anachronistic bathtub that is totally lacking in shower facilities of any kind. I suppose this means it’s only used for the kids, so, you know, crap in it all you want, I guess. 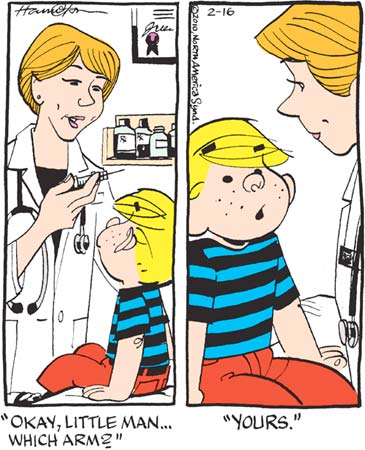 It appears that Dennis is slowly, slowly inching his way towards modernity. For instance, instead of wearing red overalls and a blue and black striped shirt as his only outfit, he’s now added red pants and a blue and black striped shirt to his wardrobe selections. And instead of hitting baseballs through Mr. Wilson’s window or harassing Margaret with frogs, he’s staring at his doctor with dead, soulless eyes and ordering her to inject herself with God knows what. 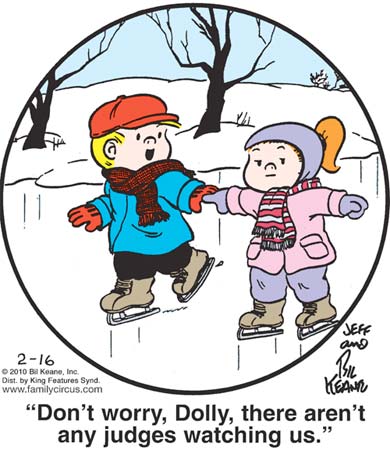 I like Dolly’s shifty eyes in this panel. “The fool! Doesn’t he know that they’re always watching, and judging? ALWAYS WATCHING. ALWAYS JUDGING. Mustn’t let on that I know … musn’t let on…”

You’ll notice that Mr. Fogarty doesn’t even bother asking Luann if she can sew. He’s had her in his class for years, so he’s well aware that she has no useful skills of any kind.