Looks like Bobbie’s traded in her formerly subtle dye job for Miss Clairol’s Brassy ’n’ Sassy™! This no doubt heralds the fact that a full-on manic episode is in progress, which can only mean hilarious good times. “Hope you like red, Ari! I’ve painted all the walls and every item in the apartment, including the food!”

Boy, this whole sequence has really destroyed my image of Mark as a bastion of righteous honesty, or at least too simple to understand the concept of “lying.” He hasn’t just been blatantly misleading his wife; he’s also wholly misrepresenting what went down with the senator and the Parker Brothers. Sure, we all exaggerate a little when we’re hangin’ with our buddies in some disused hospital office, enjoying some refreshing cans of off-brand energy drink, and maybe on Planet Mark Trail senators getting into physical altercations doesn’t constitute news of any sort. But in general, I don’t call scenes like this “getting into a fight”; I call it “getting your ass handed to you.”

Hey, look who’s finally managed to fit an appearance in the strip named after her into her busy schedule! “Dear, I don’t have a lot of time, so let me just utter a single sentence that will destroy everyone’s chances for happiness, in between sips of your mediocre tea.” 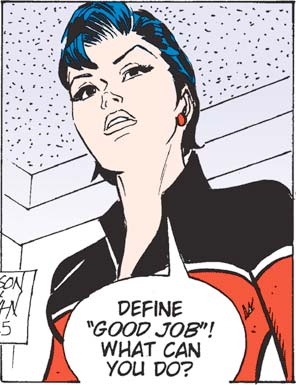 This panel will be on the front page of June Morgan’s new fetish Web site. “Is there anything you can do well for Mistress June, slave? No, don’t get up! Keep groveling!” 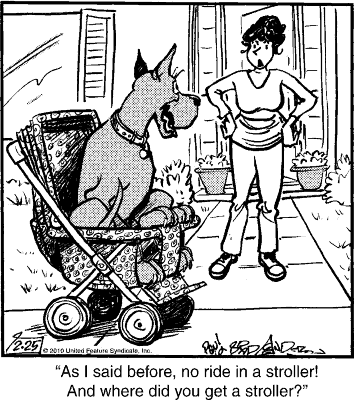 Marmaduke knows that babies are the most delicious.