Well, it’s been ten whole weeks — which is what, 48 hours of strip time? 72? — since Margo cleansed away the memory of her dead fiance in holy fire. Now it is time for her to find a new mate! This may bruise your bourgeois sense of sentimentality, but Margo has needs — needs for balding, slightly jowly dudes who are well-connected in the art world. Oh, there will be pleasure, Jack, at least for someone.

Ha ha, the only way Peter Parker could be a worse negotiator would be if his eyes popped out of his head and made an AH-WOO-GA noise. I look forward to the next two to four weeks of edge-of-your-seat action, in which our hero tries to cash this check without paying excessive fees, despite the fact that he doesn’t have a local bank account.

“That Senator Wallace, he’s a real politician! Remember that time when he campaigned for office, got elected, and then served in the Senate? Man, that’s just the sort of thing a politician would do!” 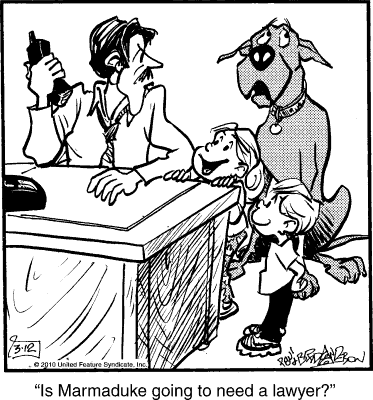 Marmaduke will of course serve as his own defense attorney, at the Hague.