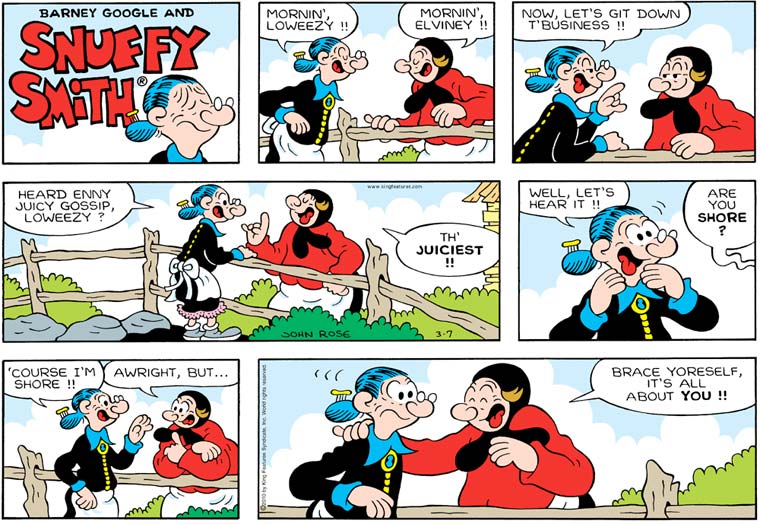 Fractured narratives that jump back and forth in time might have once been the province of snooty intellectuals and their avant garde literature and art films, but linear storytelling has become so passé that it now bores even the least discriminating of media consumers (i.e., Snuffy Smith aficionados). In today’s installment of this suddenly experimental strip, we begin with Elviney’s crumpled, distraught face, then immediately jump to her looking chipper and so eager to trade sordid tales about her friends that her tongue literally dangles from her mouth. What emotional devastation resulted in that grim visage in the first panel? Was this her past, or her future? Only at the strip’s conclusion do we come full circle to the beginning of the story, as the inveterate gossip gets her cruel comeuppance. 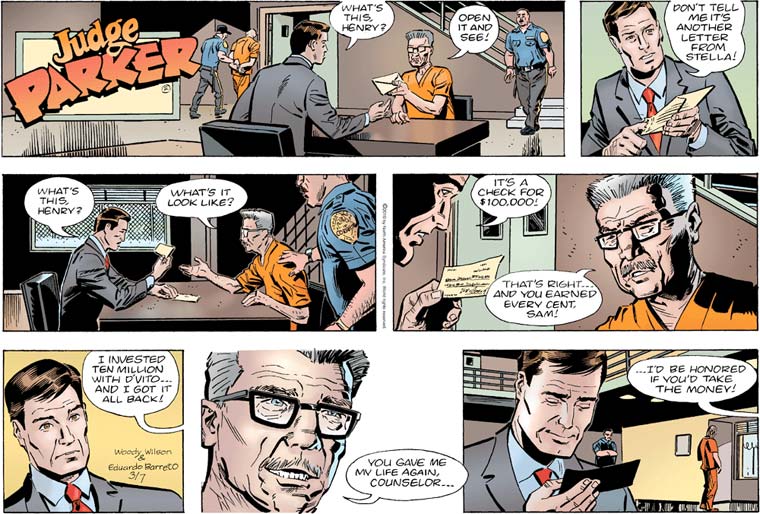 Judge Parker might have wrapped up its Bernie Madoff-ish plotline in painfully unsatisfying fashion last week, but there was still one detail left to attend to: namely, that none of the smug, irritating rich pretty people who rule the strip had been personally enriched by the action yet. And so, just as Dixie Julep’s death inevitably led to a pointlessly large advance for Judge Parker Senior’s dumb book, so now will Sam be handed a $100,000 check for his hard work violating as many bar association rules as he could think of. Sam is of course married to the richest woman in the state, and has no need for piddling six-digit sums; he will presumably cash the check and ask for the money in $1 bills, which he’ll then feed to one of Spencer Farms’ pretty, pretty horses. 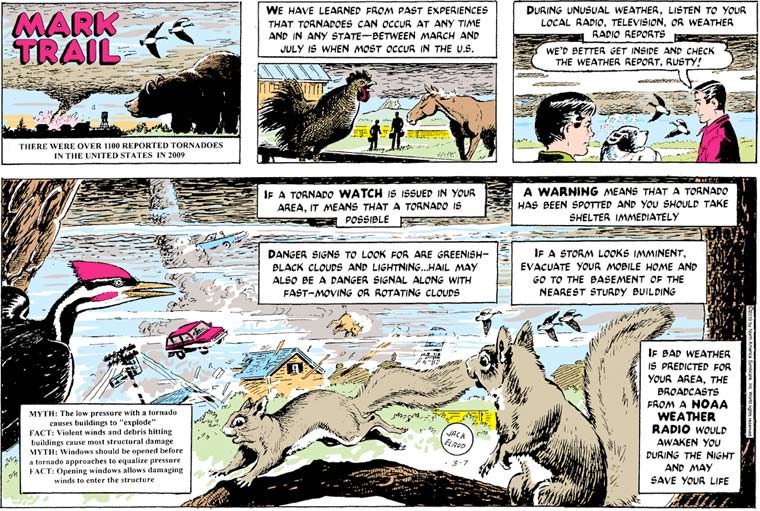 This is obviously the greatest death-and-destruction-themed Mark Trail since the world-famous tsunami episode of 2005. Particularly impressive is how calm and manful Mark looks in panel three as Lost Forest is blanketed by a terrifying death cloud. “Rusty, there’s absolutely no need to to panic, but we’ll probably want to get into the Survival Chamber I dug out by hand underneath our cabin! Oh, and be sure to grab your transistor radio, so we can groove to the smooth sounds of NOAA weather reports all night long.” His sang-froid is all the more impressive when we see the hellscape the tornado has unleashed on the area in the final panel, with cars and cows flying hilariously through the air and wide-eyed squirrels skittering about in doomed panic.

One odd thing that jumps about at me about this strip, however, is the text in the first panel and at the bottom left of the bottom panel. It’s in Times New Roman or something, rather than in the meticulous hand of Jack Elrod. It’s the same thing that was done in the more information about licorice strip, and I have pretty much come to the same conclusion about it: that whatever Jack Elrod wrote there was too incendiary for America’s comics pages, and had to be replaced by some bland, inoffensive weather facts at the last minute. I’m thinking that the first-panel box originally read “Tornadoes are the wrathful fingers of God wreaking destruction on the Earth,” and the other box was an extended discursis about how a tornado can rip a beard right off of a man’s face. 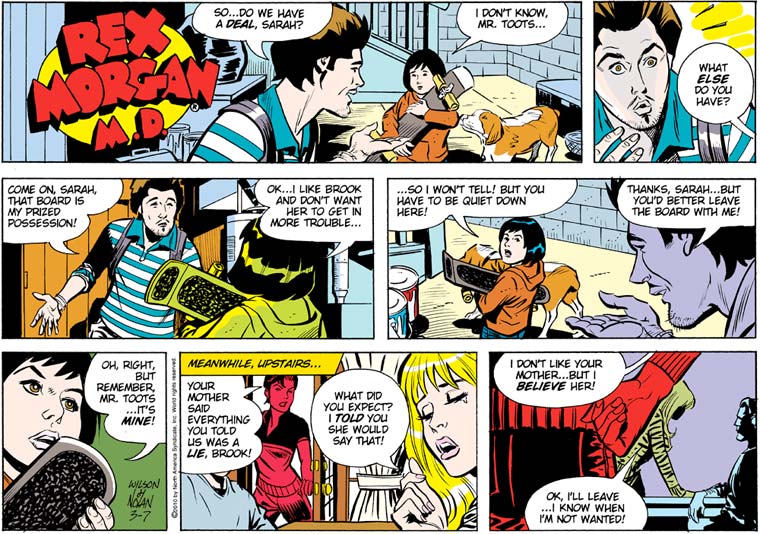 I admit that Rex Morgan hasn’t been all that engaging to me for a while now, but that all changed the moment this high-stakes Sarah-Toots negotiation began. My little joke about Sarah as a cruel monster came true more or less immediately, with hilarious results. And with Brooke, who never really seemed to care much for our stripey-shirted skateboarding bon vivant anyway, preparing to flee Chez Morgan in tears, Toots will have lost his only nominal ally, leaving him entirely at Sarah’s mercy. Look for him to spend the next two to five years living in the Morgans’ basement, with Sarah bringing down just enough food to keep him alive so that he can amuse her with his wacky hipster antics/pleas for mercy. 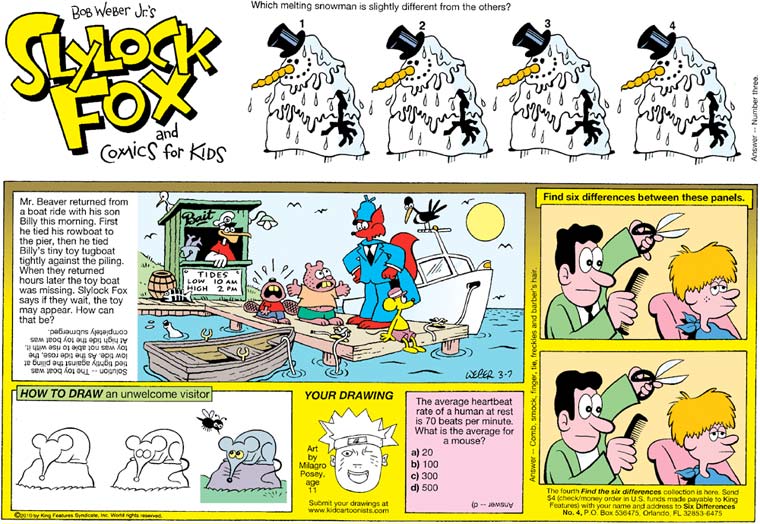 I note today’s main Slylock mystery only to point out that it’s a sad sort of semi-aquatic rodent that has managed to go through life wholly unacquainted with the concept of “tides.” More interesting to me is the Six Differences puzzle, and the look of grim anxiety on the barber’s face. It’s as if this gentlemen has, for reasons of his own, been lying to everyone for a while about being a hairdresser, and now someone has finally called him on it and asked for a haircut; he can’t back out, but, as he approaches the young man, scissors in one hand and comb in the other and panic in his eyes, it’s becoming increasingly clear that he has no idea whatsoever what he’s doing. Anyway, I wouldn’t worry about it too much, friend; if the young dude’s current hair-blob is any indication, he has little or no interest in aesthetically pleasing grooming.