You have to give a certain amount of credit to a strip that knows its limitations. Crock has repeatedly shown that it is unable to depict supposedly attractive characters as anything other than mangle-faced horrors; thus, to preserve our illusions about Otis’s adorable little girlfriend, it’s best that the strip has chosen to position her so she remains mostly unseen. If only the creators had been wise enough to similarly hide the fact that none of them have a clue what the hell an “iTunes” is.

I know that being one of the birds of Shoe means being cynical and world-weary about everything, but I hope that if I’m ever informed that the spirit of a dead loved one is attempting to communicate with me from beyond the grave, I would respond with something other than a belligerent “So?” 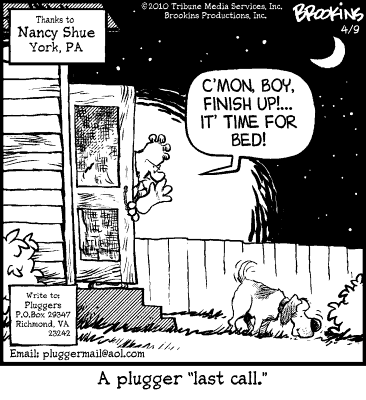 Pluggers know that “copy editing” is for big city elitists.