Good lord, who is this person in the first panel supposed to be? Is it Mary, who, unbeknownst to all of us, has long, blonde tresses hidden under her forbidding white hair-helmet? Is it Tobey, who has finally snapped and gotten extensive facial surgery to look more like her meddling mentor? Or have the master and the apprentice merged into some kind of combined organism for terrible reasons we can only guess at?

Ha ha, it was all a dream, everybody! I’m not sure whether the dream encompassed the entirety of this “Whitest West Side Story Ever” storyline or just the awkward post-performance party; either way, those who have been irritated by this plot have been rewarded with the most irritating sort of ending that narrative has to offer.

So, sadly (by which I mean happily, but I have reached the point when I only can feel joy with the Funky Winkerbean characters are brought to unprecedented depths of misery), it looks like it’s just Montoni’s New York being shuttered, not the whole company as I had originally thought. Anyway, today we learn why New Yorkers were hesitant to embrace Westview-style pizza: the “inventory” apparently left sitting around a shuttered store in unrefrigerated boxes is still fit to at least give away, meaning that it’s almost certainly made entirely of science chemicals. Mmm, preservatives from the heartland! Taste what you’re missing, urban elitists! 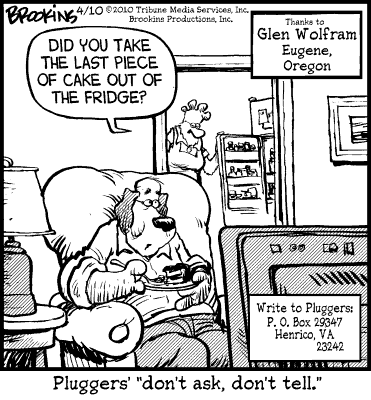 Pluggers are out and proud about their sexuality, but their compulsive eating invariably sends them into a shame spiral.