OK, your comments of the week coming … eventually! But this week I have an unusual number of items to share with you!

First off: if you’ve ever wanted to hear me jaw with Tall Tale Radio podcaster Tom Racine and Sally Forth writer/Medium Large creator Ces Marculiano, well now’s your chance! We take on the hard-hitting questions in the world of comics, such as “If Tommie from Apartment 3-G had an iPod, would that tear a hole in the fabric of space-time?” and “Has Josh ever made Ces cry?” and “Can you you do a successful podcast when one party is standing on the street in Brooklyn talking into his cell phone?” (The answers are probably, yes, and barely, respectively.)

Also! This Marmaduke is presumably burned so deeply in your brain that you probably can’t remember a time when the image didn’t haunt you. But as faithful reader Jake points out, it’s merely another entry in the awful cycle of Marmadukean eternal return. Here’s the strip from April 1, 2009: 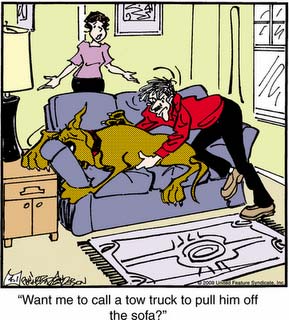 “Marmaduke can barely wait a whole year before it decided to just re-hash the same joke,” Jake says. “Don’t ancient strips like these usually take old material from the 50s, and not from twelve months prior? Oh, and it still kind of looks like the owner-man is trying to have sex with Marm. It has simply gotten worse with time. Much, much worse.”

And yet perhaps we are lucky that the Marmaduke creative team has chosen not to go too deep into the archives! After all, their fancy might have settled on this entry, which faithful reader Brian saved when it first ran in the late ’90s for his own inscrutable purposes:

OK, uh, let’s clear that out of our mind, shall we? Today’s Mark Trail features Mark beginning to discuss his overpowering love for canoeing and fly-fishing in blessed motor-free silence. Thus it may come as a shock to learn that in 1971 he served as the narrator for a book offering “tips” on operating the very motorboats whose noise pollution he claims to abhor! 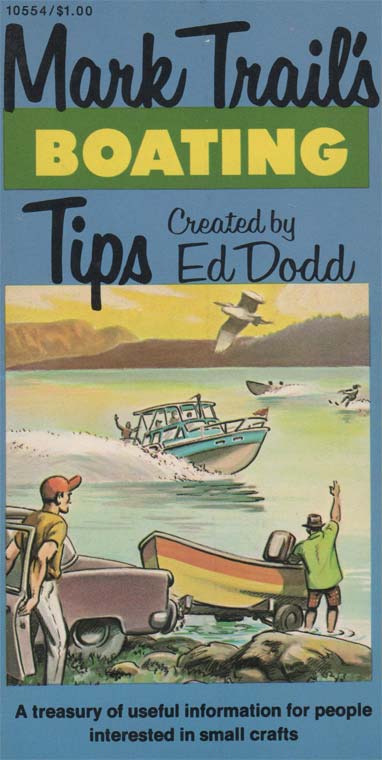 1971 was of course a very different time. Check out Mark, stone-cold smoking a pipe, engaging in a little battery maintenance while a comely swimsuited lass who may or may not be Cherry looks on in obvious arousal. (Mark is ignoring her, proving that 1971 wasn’t that different.) 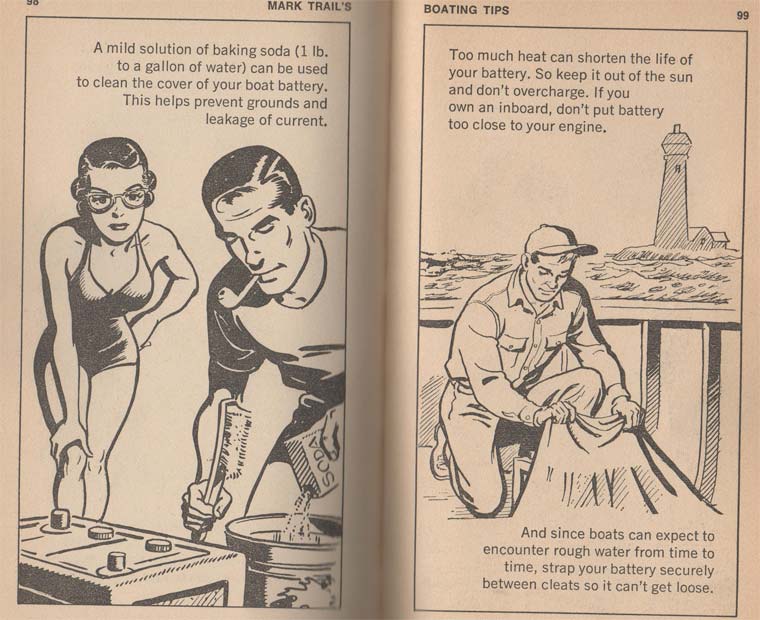 Curious otters! Jovial portly dudes in inner tubes! Uh, yeah, I have no idea either. 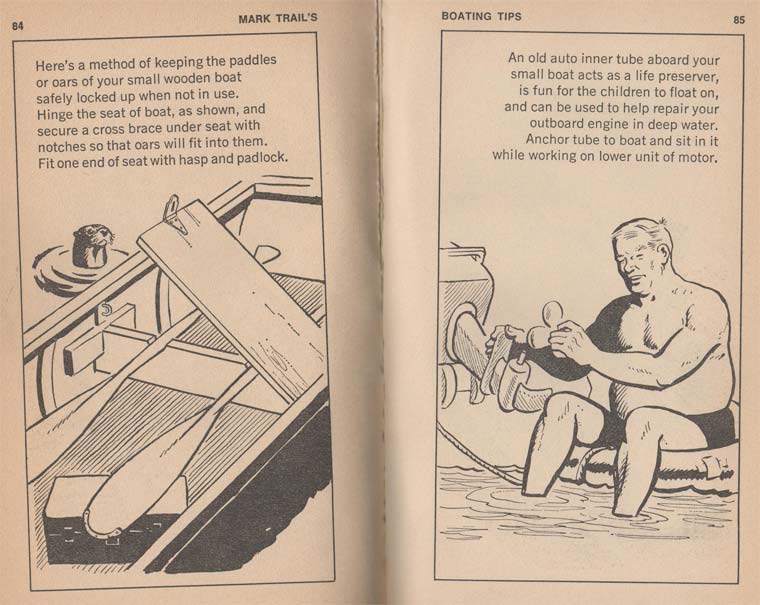 Thanks to faithful reader Randy for this stunning find.

And now, after all that delay: your comment of the week!

“Remember when Mark was going on about finding a solution to this Paradise Lake problem that would make everyone happy? It looks like the ‘everyone’ Mark was referring to is himself and the Justice Twins, Lefty and Righty. I look forward to tomorrow’s episode, when one of the paper-pushing weenies in glasses tries to interrupt Mark to ask a clarifying question about fly fishing and gets an up close and personal meeting with Righty, followed by a closing remark from Lefty. Sit down, geek, a real man’s talking about nature!” –Krazy Kat

“I think that Tobey is actually jealous that Mary is meddling someone else, and is trying to get some attention. ‘Excessive shopping, is that all? Look at me, I don’t even know how to pick up a teacup. See, I’ve dislocated my shoulder and broken several fingers during the attempt! I need your help, Mary. Help ME!'” –peabody

“‘The Professor agreed to keep the police out of the matter.’ Wait, the Professor had to be persuaded? He more than anyone should want the police way the hell up out and away from his little fraud sex dope skank party. Also, the NYPD now takes orders from shrinks? This is Bloomberg again, right?” –Uncle Lumpy

“Martin’s smile is a dazzling mix of Crest, Bobbie’s leftover happy pills, and ‘Ding, dong, the witch is dead!’ Ah, the blissful highs of institutionalizing loved ones, ammirite?” –Black Drazon

“Of all the insane depraved mutant animals and plotlines that Mark Trail has put out, a career politician profusely sweating under questioning HAS to be the most absurd and unlikely. The affection between Mark and Cherry is more realistic.” –Pingu

“Too bad the Hitler family does not have a sectional to accommodate the missus in what could have been a menage-a-trois of hellish, poorly-drawn proportions. As it stands, she just has to wait her turn with arms crossed and looking thoroughly bored/disgusted/misshapen.” –Skeltometer

“The neat thing about basing a movie on a pre-existing franchise is the knowledge that the franchise brings its own fans, who simultaneous serve as guaranteed seat fillers and unpaid viral promoters. Whoever greenlit the Marmaduke movie apparently didn’t realize that this is not the case with Marmaduke and rushed to correct it by forcing Mr. Anderson to appeal to whatever grim demographic is drawn in by the horror presented today.” –bunivasal

“In Mark Trail news, the Honorable Senator Badguy McSweatballs sure did grab that hanky fast. Where was it, spring-loaded in his sleeve?” –Paddy

“It looks like the Senator’s political career will soon be over. Luckily, he’s already dressed for his next job, Ice Cream Man! ” –Digger

“Oh, that’s rage alright in Funky Winkerbean. Just entirely internalised rage. The kind of rage that smoulders inside you, pulling you tighter and tighter, burning you from the inside out until you’re nothing but an exhausted hollow human-shaped casket full of ashes and despair. (I may have just spoiled the eventual final Funky Winkerbean storyarc.)” –Lolsworth

“Stripey butt is just a random collection of muscles flying a helicopter. It’s like the artist carefully cut out every muscle from several anatomy books and then sprinkled them over a torso-like shape, making a collage of them where they fell. He’s the John Cage of newspaper comics.” –Les of the Jungle Patrol

“I don’t read Funky Winkerbean except when it appears here. It seems like a sitcom with a ‘very special episode’ that just won’t end.” –Dingo, the Essence of Purity and Virtue Incarnate™

“And to think we all scoffed when the FAA had us drill for an attack by a purple-clad ghost flying a helicopter.” –skullcrusherjones

“Good God, I know the despair never really lets up, but this week, FW has been RELENTLESS. Are barbiturates Funky’s ‘secret ingredient’ in his pizza sauce? Well, actually, that doesn’t make sense, since drug-laced pizza would have been a hit in New York (Boom! Fancy city-types are all junkies! I gotta write to Pluggers!).” –bartcow

“Of course, as everyone knows, too-bad-your-crazy-ass-girlfriend-whom-you-unethically-enabled-and-who-nearly-killed-our-friends-and-was-sent-to-a-‘facility’-‘upstate’ sex is the best kind of sex.” –bourbon babe, unbuckled

“This does explain why Bonnie doesn’t have the ready cash to tip her stylist, which is an object lesson in itself as we can all see the terrible havoc a pissed-off and resentful hairdresser can wreak on one’s orange helmet-head coiffure.” –curlyfries

“What’s the problem? An addiction to shopping or a morbid obsession with clothing the color of baby shit? Either is bad, but one is worse. ” –Who Is Dick Player?