Regular readers of Marvin (a company of damned souls among whom I number) know that the strip takes occasional breaks from poop jokes to churn out multi-day theme weeks, like “Belly Laffs” or “CrySpace” or “Marvin’s Terrible Advice Column For Babies, The Name Of Which I Refuse To Look Up.” One of the least pleasant aspects of these sequences is that they feature jokes that are supposed to be jokes within the strip’s reality. We’re not just being invited to laugh at Marvin’s heavy-lidded antics; we’re expected to celebrate the characters’ own wit when they come up with hilarious “pregnant women get fat” gags. This to me doubles the offense of the whole project; it’s not enough that the jokes aren’t funny, but the structure of the narrative is built around taking the funniness of the jokes as a given, which makes the whole thing fail all the more.

That having been said, I have high hopes for this emerging “Marvin’s grandmother’s stand-up career” sequence. By looking at the expression of naked contempt on her face, we can tell that she has no illusions about the humorousness of her material. The fact that the easily amused and possibly senile residents of her retirement home are laughing uproariously at her litany of old people jokes doesn’t allow her to fool herself into thinking that she’s funny; instead, it just causes her to turn her internalized loathing onto her pathetic audience. If she can maintain this attitude of icy disdain, she shows great promise of becoming an excellent meta-comedian, with her entire act based on her own knowledge of her comic inadequacies and hatred for her fans. 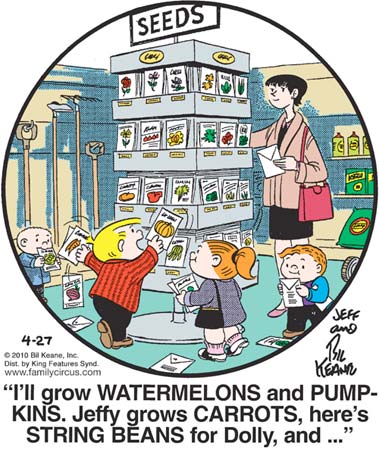 Speaking of comedic structure, I have no idea whatsoever why this Family Circus is supposed to be funny; however, I know why I like it, which is because Billy is having some kind of full-on manic episode, flinging envelopes of seeds all over the floor and gibbering out semi-comprehensible nonsense. I’m not sure why exactly Mommy, who will be responsible for picking up all those seeds when Billy runs shrieking into the fertilizer section, looks so pleased; maybe she knows that her eldest son’s brief enthusiasm for locally grown nutritious food will have passed within minutes, and she can continue to feed him Top Ramen and Pop Tarts until he’s felled by type 2 diabetes and/or hypertension at age 15.

This is almost certainly some sort of unnecessarily coy set-up to a “Tommie gets an ambush makeover from I Dressed In The Dark” storyline, but I’d like to believe that Ruby’s describing how, almost without noticing it, she became a phone sex operator.