Sweet Christ, if the sight of Mary grunting out the words “FINAL PARTING” through clenched teeth as she snips off the head of that flower doesn’t chill you to your very core, then you’re a much, much braver soul than I am. “Why wouldn’t her husband talk? He was quiet! Too quiet! Quiet people get their [snip] fingers [snip] cut [snip] off!”

For a while now people have been trying to figure out who the least essential person in this storyline is, since he or she will clearly the one who’ll end up on the business end of Bobbie’s gun. Most of the characters in the story are regulars or semi-regulars and it would be shocking to off them — but what if Bobbie plans to end her marriage by shooting herself? Having decided that her pill-addled life isn’t worth living, she can at least feel sure that the ghastly sight of a hallway decorated with her brains will traumatize Martin and Gabriella so much that they’ll never be able feel comfortable together again, knowing the consequences of what they’ve done. What she hadn’t counted on was the presence of Margo, whose inability to feel human emotions will throw a monkey wrench into her melodramatic suicide plans. Who could bear to end it all under Margo’s sneering, disdainful gaze? I’d be too ashamed.

There’s something about Miss Buxley’s expression in the final panel that I actually find quite poignant. She most definitely did not sign up to participate in the Halftracks’ spectacularly dysfunctional marital dynamic. The general’s ham-handed sexual advances are probably preferable. 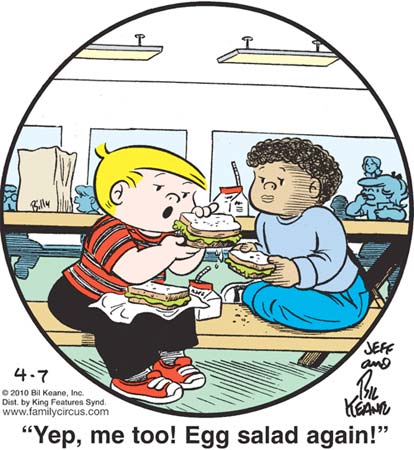 I’m pretty sure the last few Family Circuses have been straight-up re-runs, given some subtle differences in the art, so I’m assuming that this one is from the feature’s brief “experimental” period in the ’70s, when it eschewed jokes and humor of any kind and went for mundane slice-of-life realism. Yup! Egg salad again! Ha ha … huh … eh.

If I had to guess as to what in God’s name this is about, I’d say, based on some kind of half-remembered material floating around in my midbrain, that, back when only men worked and all women stayed home to keep house (i.e., in the ’50s, on television) and wives made their husbands’ lunches before said husbands headed off to the office, there was this cliché/running joke where said husbands would open up said lunches at work and, whaddya know, egg salad again! Isn’t that just like a woman, to make me a lunch that I don’t appreciate! And see, it’s like Billy’s gone into “the office,” which is school, and see, his lunch is … oh, hell, even assuming all these suppositions are true, it still isn’t funny. What I really want to know is this: Billy has a sandwich in his lap. Billy’s friend is holding a sandwich. WHERE THE HELL DID THAT OTHER SANDWICH COME FROM?