Funky Winkerbean’s trip to New York featured a few moments of publishing hope for long-suffering victim Les (though surely we’ll see those dreams get squashed later), but we’ve quickly moved back to familiar territory: impotent, misplaced rage. Actually, “rage” is the wrong word: the dialogue seems rage-y enough, but the slouchy body language and numb faces denote a total absence of the passion that is rage’s necessary prerequisite. I stand by the impotence, though.

And the misplacement. There are any number of greedy, amoral morons who can be blamed for our current macroeconomic state of affairs; but, assuming that Funky is maundering about the failure of the Montoni’s franchise in New York to take off, I think it’s unlikely that, even in the best of economies, crappy midwestern pizza would have been a big hit in a city well known for its many well-established and much-loved pizza vendors. It’s not like Goldman Sachs was nefariously creating synthetic CDOs based on pizza futures and then betting against them.

Towards the end of Tony Kushner’s Angels in America, God is briefly depicted as an enormous flaming aleph, the first letter of the Hebrew alphabet. The God of Beetle Bailey is much less impressive, consisting merely of the tiny and non-fiery Name of the strip’s creator. Today, God is attempting to make Beetle sound like someone you might actually want to go on a date with, with mixed results.

From my long and dedicated observation of the fauna in this strip, I’ve learned that when a senator starts emitting visible sweatballs, he is on the verge of a heart attack. This is a good illustration of the moral difference between our two rival lawmakers: Senator Good Senator only suffered a cardiac event after engaging in righteous fisticuffs with some longhair, while Senator Bad Senator’s heart is going south as soon as he realizes that arrest and/or punching might be in his future. 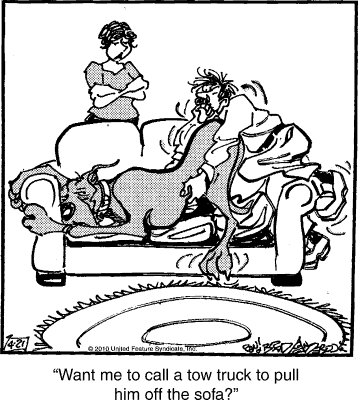 Yeah, so, uh, this happened. Let’s never speak of it again, shall we?