O cruel twist of fate! Here our hero, the Amazing Spider-Man, is betrayed by that which he loves the most: television! He always dreamed of the day when his image would appear on the fantastic glowing picture box in his living room, but now that it’s arrived, it’s just making him confront his financial inadequacies. Perhaps Peter will take this opportunity to educate himself about the rapidly consolidating corporate-controlled media landscape — presumably the Globe-Herald and this local TV station are owned by the same company, and whatever freelancing agreement Peter signed gave that parent corporation the right to use his work across all of its properties. Maybe Spidey’s next battle will be to make readers more aware of alternative, independent journalism, in print or online! Ha ha, just kidding, he’s going to stay at home and sulk and not even go see Mary Jane’s show, wah wah wah, poor Peter Parker, nobody loves him. 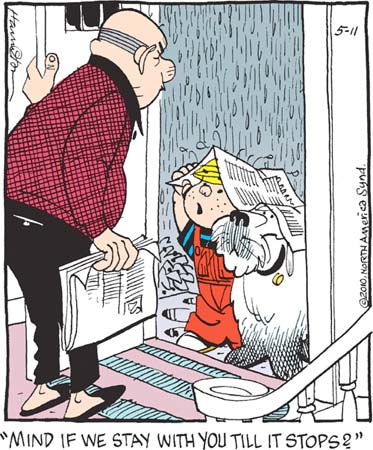 I’m not exactly sure why this is supposed to be either funny or menacing. Perhaps Dennis’s parents have thrown him out of the house into the pouring rain for his general bad behavior, and now he represents the social menace of child homelessness?

Apartment 3-G really brings home to me how much I make quick assessments about people’s age and social circle from the way they dress. This usually works well enough in the real world, but when you’re dealing with a cast of characters whose wardrobe appears to have been meticulously copied from mid-’60s issues of Redbook, you’re left sort of at sea. Are the A3G girls supposed to be 25? 40? 55? 25-year-olds involved in an elaborate cosplay subculture? Who knows! What I’m trying to say is that Lu Ann may well be a 12-year-old. It would explain a lot.

In happier news, Marvin is about to be mauled by a vicious dog.