Ha ha, did you think that Ari was talking to his pill-popping love Bobbie, who he just weeks ago bundled off to some private upstate nuthouse? Don’t be silly; obviously he would recognize her voice on the phone, and surely no facility that specializes in making the problematic relations of rich people conveniently go away would allow its patients any method of communication with the outside world. No, I think we have to assume that the Professor has been sending out thousands of emails that begin with “Dear One: Do you want h1gh-quality prescription MEDZ, cheap?” and has finally managed to snag a customer.

We’ve already established that Herb’s marriage fills him with nothing but dread, so it’s probably to be expected that Herb will plunge his living room into total darkness not so that he can get amorous with his wife, but so that he doesn’t have to see her.

A “face-off” with Marmaduke generally ends with somebody getting his or her face bitten off.

Oh, and hey, you know what? If Mark Trail is going to keep showing us day after day of Rusty face-horror, then I fully intend to keep sharing it with you, at full magnification: 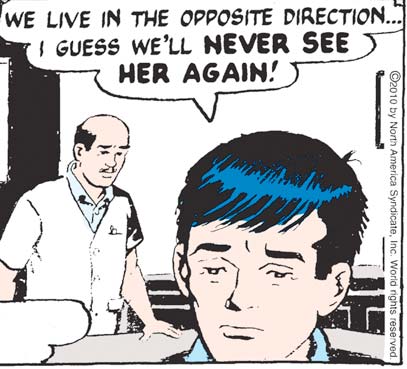 Rusty’s eyes, having once shone with a terrifying inky dark light, have now shriveled down to tiny pits, and his cheeks have grown hollow with grief. He pretty much looks like the guy from “The Scream,” after he’s stopped screaming.