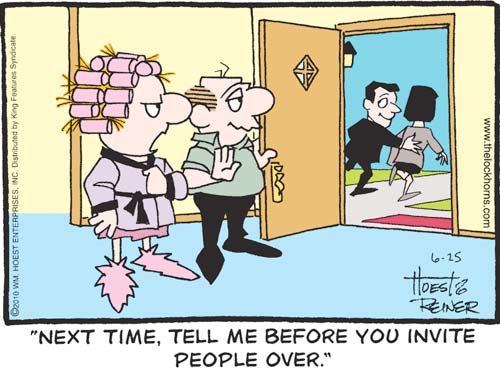 I’m deeply intrigued by the looks Leroy and the gentleman half of the rapidly departing couple are flashing at each other. That sheepish, crumpled smile is Leroy’s usual expression when he does something shamefully enjoyable, often while drunk (generally this is flirting with a statuesque blonde three times his height). The easy answer is, of course, that this guy is Leroy’s gay lover, but in fact I think the situation is sadder and more poignant: Leroy has finally made his first-ever friend. He was so excited at experiencing a brief moment of human contact that wasn’t steeped in passive-aggressive bile that he invited the man over to visit without asking or even telling his wife. “Sorry, new friend!” Leroy is thinking as he waves. “We’ll do this again sometime!” “That Leroy’s a nice guy,” the other fellow thinks, “But just being around him and his wife for 45 seconds has almost sapped my will to live. We’re never coming back here again.”

Oh, darn, Funky survived after all, and now he has something else to be pissy and self-righteous about. Unless … that inky black panel really was his death, and now he’s a dead-and-doesn’t-know-it ghost, à la Bruce Willis in the Sixth Sense. Seeing how much everyone resents his angry dickishness and fails to mourn him would be a suitable punishment for his various crimes.