Ought I apologize to you for keeping you criminally out of the loop on happenings in Gil Thorp? Perhaps! (I’m not going to say that I yearn for the day when a lack of basic knowledge of the current Gil Thorp storyline is an offense punishable by a fine and/or imprisonment, but I’m not going to say I don’t yearn for it either.) Anyway, long story short, Milford sports teams continue to play in the final week of June, long after virtually every school in the country has knocked off for summer vacation, and alt-country sensation/fiery pitcher Slim Chance has made a video for his band, which he’s uploaded to YouTube. And now, in a moment that will change both Slim’s life and the face of popular music forever, some chinbearded dude in Chicago is presumably forwarding said amateur YouTube video to some other dude named “Geoff,” because that, apparently, is how the music industry works, in 2010, chinbearded dudes in hipster glasses just stone cold forwarding YouTube clips to each other, all day, every day.

Herb desperately hopes for some unimportant daily minutia to distract his friend from his own thoughts, because those thoughts, as is customary for characters in this strip, inevitably turn to death.

You know, I can get away with running gags like “Marmaduke is a demon-beast who eats children and torments his supposed ‘owner,’ who is Hitler,” because I can be pretty sure that, no matter how close the subtext is to the surface, the strip will never actually show a child sliding down the dog’s gullet, or depict Phil giving a rousing speech exhorting the invasion of Poland. But trying to make up exaggerated versions of Funky Winkerbean’s next ultra-gloomy plot twist is a more dangerous game. I swear to you that my Friday proposal that Funky is dead and doesn’t know it was meant entirely in jest, but now … I’m not so sure. Either he really is already a specter, or, as the now-classic YouTube montage “No Signal” teaches us, he’s about to be murdered by an ax-wielding maniac.

Oh, and have we been a little short on Rusty-horror lately? 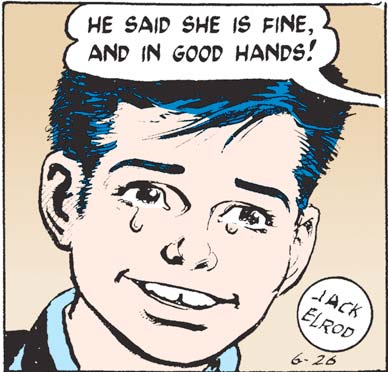 Rusty does not weep saline tears as the humans do; instead, when sad or overjoyed, he cries tears of melting flesh.