Your comment of the week coming in a bit, but first: several items! First off is a set of classic Eisenhower-era Mark Trails I’ve been meaning to share with you for a while. They were sent in by faithful reader JJ Carlisle, who found them at an antique fair, meticulously cut out of the newspaper and taped into a scrapbook by some child who had fairly bizarre taste in comics. They feature the sad story of a blind colt almost callously killed by its cruel lady owner, only to be rescued by Cherry and “Scotty,” the ugly Lost Forest orphan ward of the moment. 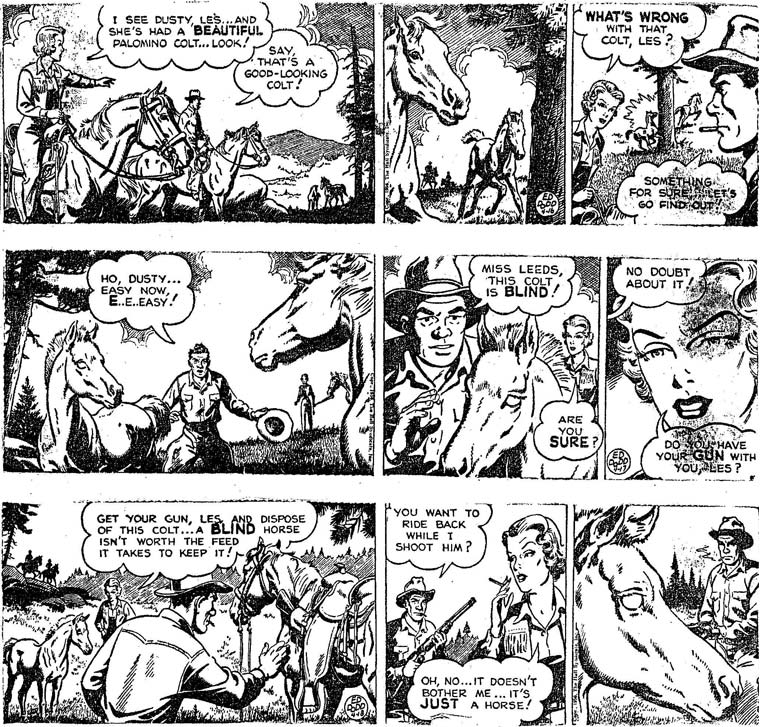 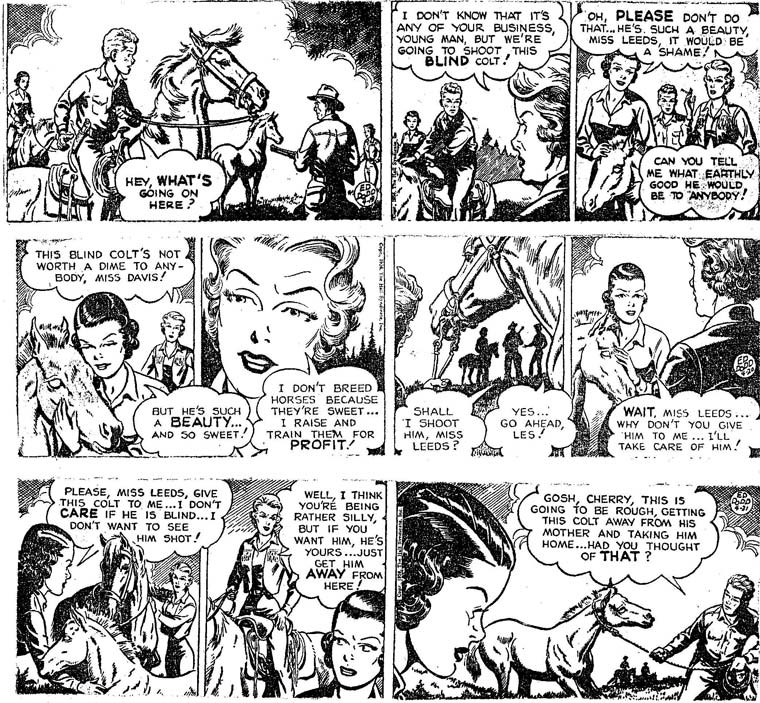 How can this beautiful but useless horse be saved? By the appearance of “Mike,” a suspiciously Rusty-looking gap-toothed boy-monster! 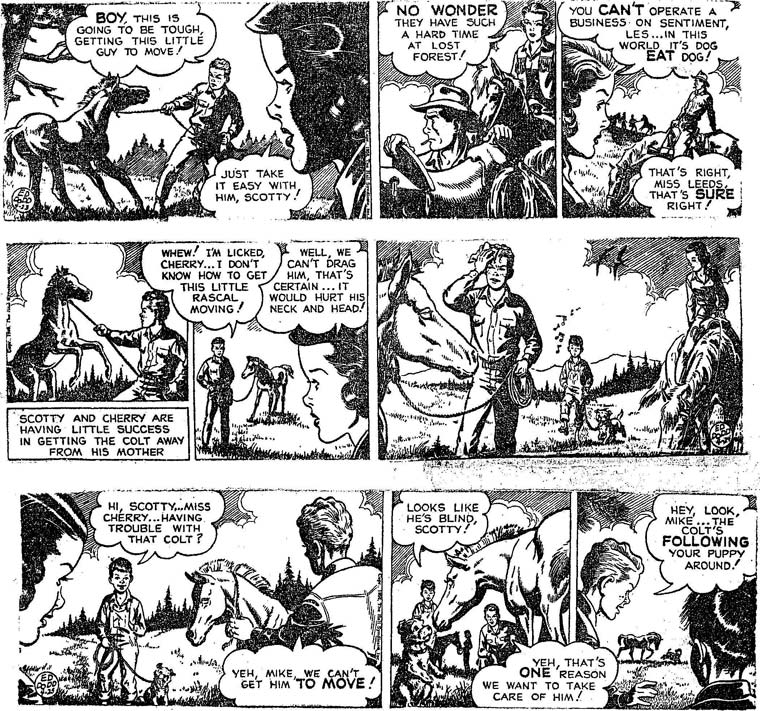 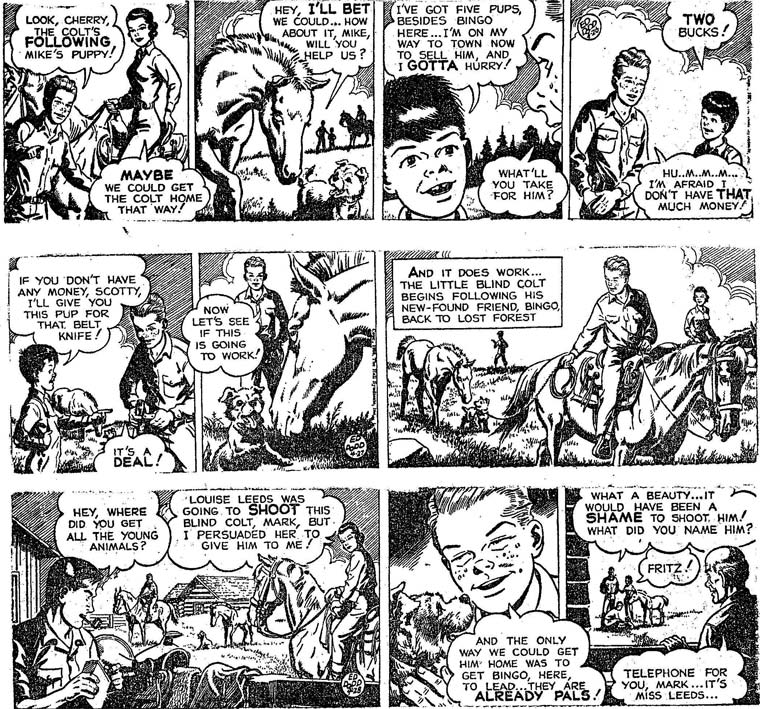 Notice that, unlike our Rusty, Mike is totally unsentimental about dogs. “Yeah, I gotta hurry and sell this dog, or just throw it in the river or something. A knife? Sure, I’ll take a knife in exchange. Now I can stab things!”

Also note the random bolding throughout! It’s nice to know that this is a Mark Trail tradition of long standing.

Also! Faithful reader LoMinang was combing through the transcripts of the Warren Commission, for some reason (THE TRUTH IS OUT THERE), when he found the following exchange between a Mr. Thornley (who had been in the Marines with Lee Harvey Osward) and Albert Jenner, an assistant counsel on the commission:

Mr. JENNER: Did you think it went beyond that, this unkemptness or this sloppiness?
Mr. THORNLEY: It did go beyond that, because he seemed to be a person who would go out of his way to get into trouble, get some officer or staff sergeant mad at him. He would make wise remarks. He had a general bitter attitude towards the Corps. He used to pull his hat down over his eyes so he wouldn’t have to look at anything around him and go walking around very Beetle Bailey style.
Mr. JENNER: What is Beetle Bailey?
Mr. THORNLEY: Beetle Bailey is a comic strip character who walks around with his hat over his eyes much as Oswald did.
MR. JENNER: You want to keep in mind, Mr. Thornley, I am an old man and there are things I don’t pick up or get hep to.
Mr. THORNLEY: This is nothing recent. This is a comic strip that has been around quite a few years now.

The idea that a U.S. government official, either in earnest or sardonically, admitted on the record that he is not “hep to” Beetle Bailey is surely one of the greatest pieces of information I have encountered this week.

And, in other Beetle Bailey news, thanks to the many, many readers who sent me the link to the recently released collection of Mort Walker’s filthy sexy cartoons. Not safe for work, or for people who are trying very hard not to think about General Halftrack’s inner sexual life!

“Somehow I don’t think the tagline ‘Supports the weight of an average woman!’ is going to sell many shoes.” –ks

“Dick Tracy invariably gives us three images, one of which is Dick. I call it, ‘Dick Tracy and the Two Other Things.’” –Uncle Lumpy

“Dick Tracy doesn’t seem to tell stories in the usual sequential way. You get an insane setup at the beginning and a gruesome death at the end, but every thing in between is just short, violent, vignettes in random order.” –Andy L

“The Parkers are not !ing. The !s are coming from Stan Lee and Larry Lieber, because Tony Stark is describing Mary Jane as ‘talented,’ and they totally are not writing her that way.” –Joe Btfsplk

“Surely the ‘Havin’ a good time’ part starts for his parents after they dump him with his new family?” –Baron Bizarre

“I am positively giddy with anticipation over the upcoming meeting between Dr. Roberts and Jenna Thomas. I envision it going something like this. Mary: ‘Welcome, Dr. Roberts. I’d like you to meet Jenna Thomas. Can I offer you a blanched marshmallow? A ramekin of poached fig casserole?’ Dr. Roberts: ‘Love is not for everyone.’ Jenna Thomas: ‘That is so true, Doctor! Speaking of which, what do you think of Bonnie Johnson’s finances? Are they awesome or what? Seriously, it’s all I can think about.'” –Violet

“They need to change the zoning ordinance to prohibit misuse of punctuation. There’s no way an officer of the law should be allowed to end four unexciting sentences in a row with exclamation points.” –Iconoclast

“I was thinking that Mary had the ability to conjure an current image of the doctor, like the Wicked Witch’s crystal ball or the Phantom’s Big Red Circle of Off-panel Communication. This would mean that the doctor had dyed his hair in a desperate attempt to disguise his appearance. It’s nice to think at least some of Mary’s victims go down fighting.” –Walker of Dog

“I can just picture the Mary Worth artist looking over the dialogue of the last couple of weeks, struggling with the eternal MW dilemma of How The Hell To Make This Tortuous Crap Visually Appealing. ‘Hands!’ he decides. ‘That’s it! I’ll make them do … something … with their hands! Humans do things with their hands when they talk, right?'” –Krazy Kat

“Act out today’s Mary Worth with a friend. You already know how funny the person playing Jenna will look in Panel 2, so, expecting the hilarity, the person playing Mary will try to keep a straight face while delivering his or her line and end up looking exactly like Mary in Panel 1. What I’m saying is that we have finally found out Mary’s power that makes her a Super Meddler: She can see at least 5 seconds into the future.” –Drew Funk

“My guess on Mary covering her mouth: she has a little Mary-Worth-head tongue à la the Queen from Aliens. And it’s hungry. For eyes. Hence the ‘wink’ in the second panel.” –DevinT

“Jenna’s not having a stroke, she’s merely trying to shut out the terrifying visage of Mary’s meddling. The problem is that if she shuts both eyes that leaves her wide open to attack. The best compromise is to wink fearfully.” –TheTJ

“Oh man, Mary’s totally trippin’ balls! What’s she even looking at? ‘Oh man Jenna … I … I can SEE YOUR EMAIL ADDRESS AND IT IS LONELY.'” –Tophat

“Oh my God, 30+ years of obsessive Fantastic Four geekery has finally paid off with a minor insight on a possible upcoming plotline in the newspaper Spider-Man comic! This is not as satisfying as I had hoped.” –Ed Dravecky

“Only the most hardcore gamers ever made it to the level of Duck Hunt represented by the large panel in this Sunday’s Mark Trail.” –Sed

“The ‘hospital’ has shrunk. From the outside it looks like some elite mental institution or a place where celebrities might to go dry out; inside it is circa 1952 Eastern Europe.” –MWDG

“Gosh, if Dr. Roberts’s face was any paler, I would suspect Mary Worth of jumping on the vampire bandwagon. ‘Oh, you mean … social contact? I was hoping she would just waste away so that I could sample her delicious blood.'” –Josh N.

“I’ve never read a hookup email that sounded so much like a Nigerian inheritance scam.” –150

“In an effort to compete with other online dating sites, Mary has launched M-Harmony, where you’ll be matched on the only dimension of compatibility that counts: Mary’s unbreakable will.” –Dude…wait…what?