I imagine that the guy who draws Blondie gets tired of hearing about the strip’s title character’s unusually large and shapely bosom, both from the “oh God it’s hot it makes me so hot” camp and the “you’re a pervert creating unrealistic body images” camp. Look, can’t a guy draw a dame who’s stacked without getting an earful about it? I’d like to think that today’s strip is supposed to be some kind of response. You want to see a broad with big cans? Check this one out! She’s a freak of nature! A biological impossibility! I guess she’s supposed to be heavy-set — thus the wacky food-obsession banter — but with her relatively svelte legs, she just looks top-heavy, like she’s going to tip over in one direction or the other at any minute.

“BPH,” for those not in the know, is benign prostatic hyperplasia — basically an enlarged prostate, which makes it hard for Funky to pee. So, you know, Funky is either experiencing a bizarre time-travel phenomenon or an intense, lucid dream, and after about twenty minutes it’s all come back to physical discomfort and potentially cancerous body parts. He can’t even contemplate that tiny cup of refreshing water without thinking of the hours of agony he’ll be spending in front of the urinal later. Might as well make sure his past self is good and glum too, while he’s at it! 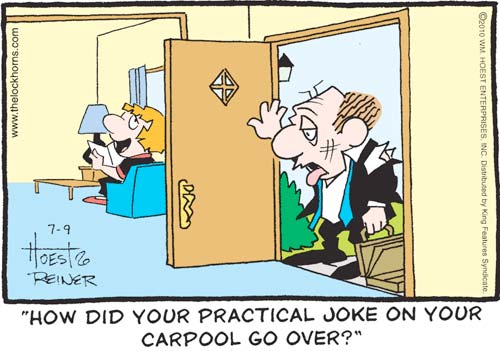 Leroy’s carpool apparently reacted to his “practical joke” by beating the crap out of him. Or perhaps it was a reaction to his unpleasant personality.