Upon first glance, you probably found this Shoe comic pretty depressing! After all, it reveals the fact that our hero Cosmo is such a slob that he spilled enough spaghetti sauce on himself to soak through his clothes, or maybe that he simply sits around eating spaghetti with no shirt on, to make cleanup easier; furthermore, it appears that he was so numb to his own slovenliness that the resulting mess went unnoticed for hours or perhaps even days. However, I would argue that he still clings to a shred of dignity, in the form of that towel around his waist. Someone who had totally given up on life would just stand there in the nude while rambling to his doctor on his cell phone, but some feeble sense of modesty causes him to cover his lower bird bits, despite the fact that, given that he’s describing his symptoms verbally, he is presumably not speaking on some kind of advanced picture phone.

I first saw this comic as a somewhat smaller graphic, and in that form the Desert Sage’s eyes looked sad to me, and the strip seemed quite poignant: the Sage knew he had to clear the bats from his sand-cave home, but he had grown to love them, and would thus do them one last kindness before euthanizing them. But in this larger version of the graphic, his eyes look downright sadistic, as if he’s cackling with delight at the prospect of drawing the bats’ last days out as long and as cruelly as possible. Then I realized the real tragedy, which was that I was trying mightily to discern human emotions from the meaningless scribbles that make up a typical Crock strip. 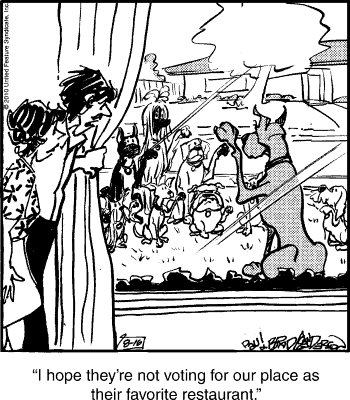 Ha ha, don’t be silly: nothing resembling “democracy” could possibly be happening in a pack of dogs surrounding by Marmaduke. No, those dogs are raising their paws because they’re pledging their allegiance to their Dark Lord, who will soon lead them in an assault on the poor townsfolk that will leave rivers of gore in its wake.