Poor Slylock! He’s an expert at fancy deduction and ratiocination, and a savant at picking out seemingly insignificant details from a crime scene that may be important, but it appears he’s not cut out for the rough and tumble of real crime-fighting. For instance, some member of the strip’s rogues gallery — Harry Ape? Slick Smitty? Reeky Rat? — has trashed Slylock’s home, sending a message that he’s not safe anywhere. And yet all Sly can do is obsessively try to figure out the exact time when this act of intimidation took place. Do you think whatever thug wakes you up tomorrow with a well-placed fist to the snout is going to be impressed by this, detective? You’re officially in over your head. 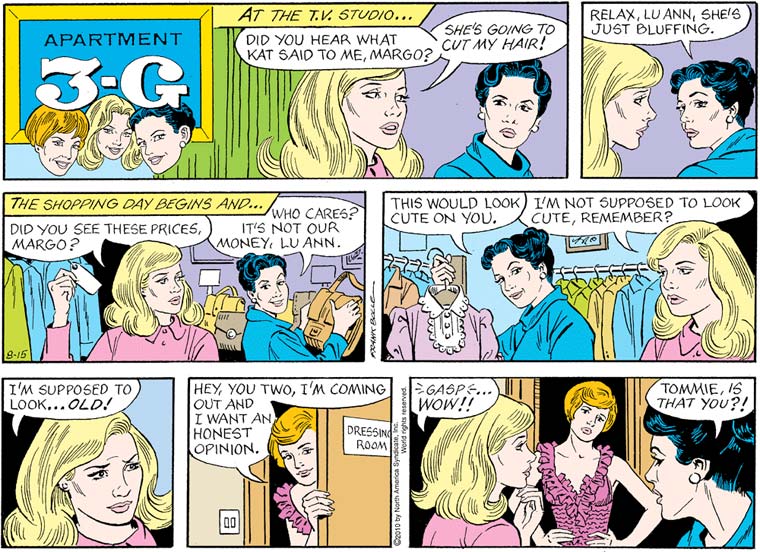 Oh, dear, we appear to have reached the point in the storyline that I most feared, when the makeover would reveal the limitations of Frank Bolle’s ability or willingness to depict clothes worn by human females in the year 2010. The dress Margo is holding up in panel four would in fact make Lu Ann look old, and not cute, if by “old” we mean “a reanimated zombie of a woman from the 1910s in her burial dress.” And speaking of age, Tommie’s dress in the final panel looks more to me like “overdramatic prom dress” than “sophisticated thirtysomething professional.” At least her facial expression of forced sultriness barely masking profound discomfort is pretty accurate. 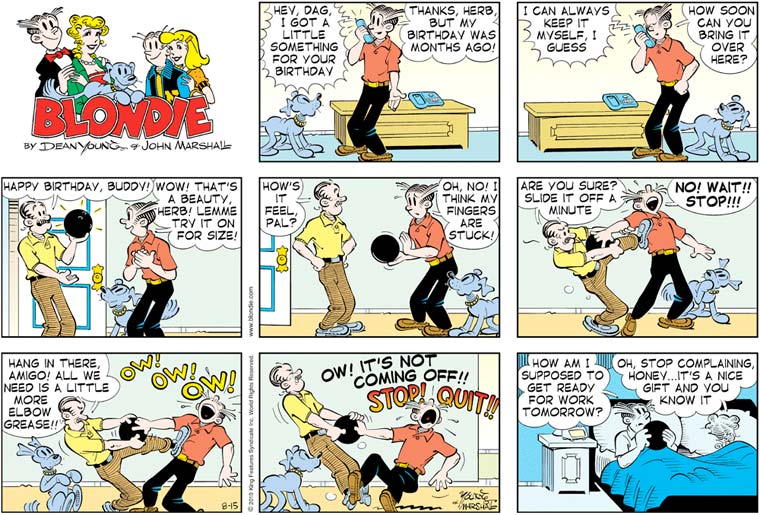 Here again is an instance of a Sunday strip whose top row of throwaway panels changes the narrative’s entire complexion. In those papers where the strip appears without the throwaway panels, it’s just a dumb joke about Dagwood getting a bowling ball stuck on his hand. With the throwaway panels, it’s a poignant story about a man whose best friend doesn’t remember his birthday, and tries to make up for it by just giving him some bowling ball he found in his basement, the finger holes clearly drilled for somebody else.