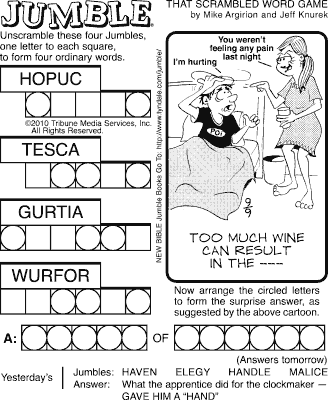 Faithful Jumble readers know that the seemingly innocent scrambled word game is slowly transforming into some kind of social-realist tract on the seedy underbelly of modern society, with routine depictions of sleaze and vice. Today’s panel continues this trend, depicting a baffled and hungover young man (wearing a wizard hat?) being taunted by the hard-faced barfly he gave it up to the previous night in a drunken haze. The can in her hand is a nice touch (presumably she’s already getting started on the day’s drinking), as is the wastebasket right next to the bed (for used condoms, or mid-intercourse booze-induced vomiting, or both). Is our protagonist wearing a t-shirt that just says “Pot,” of the sort popularized by the beloved Weedmaster P character in the delightful Overcompensating Web comic? Maybe, and maybe if he had stuck with that substance, he wouldn’t be in his current predicament.

Oh … oh dear. It appears the makeover has hit its first major disaster, as the syndicate colorists have completely lost track of who this Lu Ann person is and just arbitrarily given her red hair. Apparently they work by hairstyle only, which is bad news for a strip that’s trying to change the hairstyles of its characters. You can see why they might make this mistake, though; with the curls and the off-one-shoulder toga-like thing, Lu Ann looks like she might be playing Venus in a high-school play.

I’ve been mostly ignoring the Beetle Bailey 60th anniversary wank-a-thon, but I did enjoy this 1965 strip, in which “wacky rebel” Rocky attempts to assassinate a general officer. He’d rather go to Leavenworth than go to ’Nam, man!

Aww, isn’t this cute! Holly saved the message she got telling her that Funky was in a car wreck. Presumably it’s so she can relive over and over again that brief, magical moment when she thought the nasty old hatesack might be dead.