Makeover victim #1, revealed! Margo’s here and she’s, eh, not actively laughable. Still, this seems like it might be kind of overcompensation: Kat has reacted to Margo’s penchant for turtlenecks by forcing her to wear the exact opposite of a turtleneck, a dress with a top that’s as low as possible while maintaining a G rating. Margo might enjoy all the admiration her shoulders are getting now, but wait until she finds out that every single item in her remade wardrobe will be strapless, including her new collection of business casual tube tops and her winter coats.

This week Gil Thorp has been very busy telegraphing the fall plot: it will be about Troubled Foster Kid Cody Exner! Gil had a life-changing conversation with Cody’s current foster mom yesterday, in which he learned that adults cannot remain in the foster care system indefinitely. This puts a crimp in his plan to find a foster family who will care for him so he can quit his job and drink full time.

In panel three, we see that the takeaway from the plot will be that foster kids are angry and violent — at least before they get some good, solid half-assed coaching from Gil Thorp. Cody will come around and be ready for adulthood by his 18th birthday, even though a few Mudlark teammates may be maimed in the process. 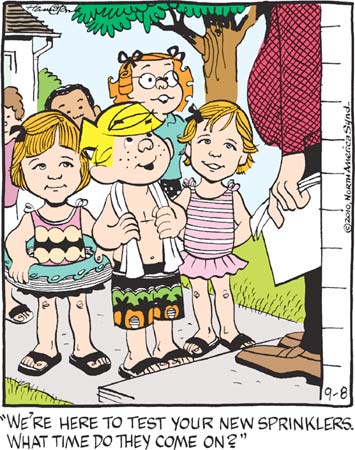 I was going to make some kind of distasteful “Dennis is a pimp” joke here before I was brought up short with horror at the faces of the little girls on either side of him. They’re a degree or two less cartoonish that the other children — could they be an attempt to represent two actual specific kids? — which only makes them that much more unsettling, in no small part because the more lifelike faces draw attention to their freakishly knobbly legs.

To distract yourself from this horror, consider the fact that Mr. Wilson is such a classic cartoon character that his face isn’t needed to establish presence in the scene, just his iconic gut.

Hey, everyone, Dirk’s back, and the power of Christ compels you to like him! I’ve been ignoring him thus far this week, but I feel he earned a spot in this blog by treating Mrs. DeGroot like some sort of stalking-fun-killing vampire.