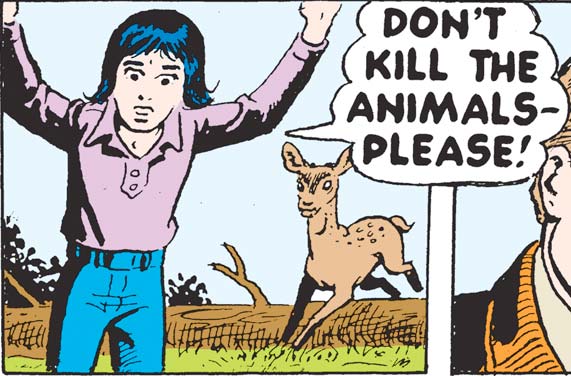 The first panel of today’s Mark Trail is so glorious that I felt you deserved to see it as large as I could give it to you. It’s almost like you are some corpulent political insider, hoping to enjoy a little canned hunting and some desperate promises from the next governor, when suddenly a deranged little monster and her dead-eyed deer lunge at you, demanding that you refrain from doing exactly what you’ve paid to do.

Note that her upper body seems disproportionately larger than her legs. That’s probably a carefully crafted technique that provides the illusion of the little girl moving rapidly towards you. It certainly isn’t because she’s been crudely assembled out of whatever clip art has been left lying around on the floor of the Mark Trail studios, no sir! 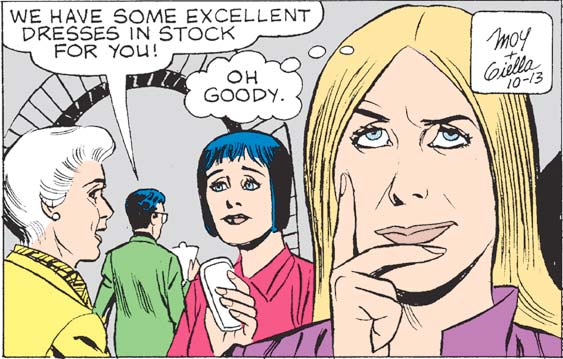 Also worthy of close inspection is our first encounter with Adrian’s opinionated friend Jill, here expressing her opinions with an eye-roll so epic she appears to have sprained her face. We’ve all been preparing ourselves for some kind of epic battle of the meddlers over how Adrian’s wedding should be run, but Jill’s deep thought-ballooned sarcasm seems to indicate that she’s already bored with the whole exercise. Perhaps she will realize that Mary is eager to do dull stuff like watch Adrian model a series of indistinguishably hideous bridal gowns, and she’ll excuse herself to go do something that doesn’t make her want to slit her wrists.

Wow, it seems that the famous hobo solidarity completely falls apart once it turns out that one of them has money, and that the true proletarians are about to turn on the kulak who’s been lurking in their midst. Dick Tracy will be truly conflicted if he ends up triumphing due to the thing he hates the most: class struggle.