Your comments of the week shortly, but first comes this haunting image from faithful readers Teresa and Joel: 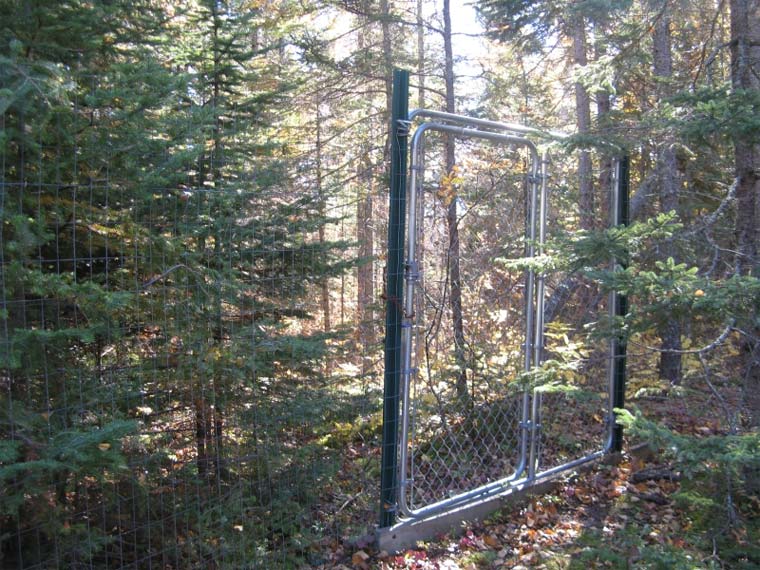 “We were hiking at Judge C.R. Magney State Park in northern Minnesota this week, and came across a chain link fence out in the middle of the woods. Perhaps the current Mark Trail plot is not as far-fetched as we all thought!”

Thank goodness you didn’t try to get behind that fence, Teresa and Joel, or your heads would have almost certainly would have ended up on some senator’s wall!

And now, here is your comment of the week!

And your almost as funny runners up!

“‘Well, Mary, Type A personality means someone who likes to tell other people what to do, who has to get their own way, who is just really pushy and sort of a control freak.’ [awkward silence]” –T. Chicana

“Hold on, Jack wanted someone more average than Lu Ann, and he somehow passed on Tommie? What’s going on here?” –Chip Whittle

“Huh. I missed the press release when Willem Dafoe was recast as Aunt May.” –monsieurjohn

“Is it raining in Gil Thorp, or is the sky made of glass because it’s some kind of Truman Show experiment where a bunch of infants were left near a pile of uniforms to see how they’d develop?” –Rhekarid

“That dead-eyed look that both Peter Parker and Aunt May are sporting in panel three is bottomless despair at the thought of spending a night away from the television.” –Judas Peckerwood

“Remember when Dad said that he never, ever wanted to be kept alive in a vegetative state, and then he asked for help setting up a ‘DVR’ order? Too bad we just chuckled and rolled our eyes.” –late2theparty

“I really hope Peter and MJ are doing that thing where Peter is pulling his fist forward and MJ is applying opposite pressure and then she lets go, and he smacks himself in the face with his own fist! Because that would be great.” –Bootsy

“I think Crankshaft has been a dream sequence all week because Jeff and Pam are acting as if the malapropisms are funny. We can only hope that in the real world Jeff and Pam are smothering him with a pillow.” –nescio

“I envy Crankshaft right now. He is dead, right?” –TheDiva

“Rex Morgan: Proof that our modern society’s conception of celebrity has gone too far. I can see the Wikipedia page now: Mayor Dalton’s prostate is a compound tubuloalveolar endocrine gland of Mayor Dalton’s reproductive system. It is most famous for having cancer. [1] While most people have never seen it and X-ray images of it are unavailable to the public, Mayor Dalton’s oncologist has called it ‘the most beautiful prostate’ he has ever seen. [citation needed]” –whozitwhatzit

“Who but communist hobos would warm themselves next to a barrel of glowing uranium bars?” –Patrick

“Dick Tracy is wholly unfamiliar with the hobo gay dating scene. You can’t just ask him to take it out so you can take a looksee, you have play sly. Maybe set a garbage can fire first.” –Taquelli

“I hope to hell that’s a flashback, and not a giant portrait of Becky’s car crash that the coffeehouse has displayed on its wall. On the other hand, maybe that’s why they call the place ‘Jitters.'” –BigTed

“I don’t really understand how Crankshaft consistently misfires so badly with such a potentially awesome premise. Like if someone told me, ‘I have this idea for a comic featuring adorable malapropisms a la Family Circus but instead of being delivered by winsome tots, they’ll be coming from an angry old jerk whom everyone hates,’ I’d be like, ‘Hey, that sounds hilarious!’ I guess it only works in theory.” –Violet

“Is Tommie sleeping in her new shirt? If so, I look forward to the next thirty years of her descent into Miss Havisham-like madness, wandering around the apartment in her faded lilac ruffle and bitterly cursing those who promised to make her interesting.” –A New Day

“The Spider-Man artists love MJ’s name in lights too, because it means half a panel of text in generic free fonts instead of art.” –bman

“This nascent Spider-Man plotline is blatantly derivative of Uncanny X-Men #148, in which the Morlock Caliban emerges from his sewer dwelling to abduct Kitty Pryde (alias Ariel, alias Sprite, alias Shadowcat) and forces her to be his subterranean bride. I expect a written apology on my desk Monday morning, mister Stan Lee, if that is in fact your real name which it is not. Excelsior to you, sir.” –Chyron HR

“Well. That’s okay, everybody. You can all just ignore the gigantic nipple-covered hat in today’s Curtis. You go on having these civilized discussions on the pros and cons of this campaign, and I’ll just be over here silently screaming to myself.” –Caroline