The art in Beetle Bailey isn’t really “good” per se, but sometimes the characters’ faces are quite expressive in their stylized way. Today, Sarge in particular has this look of resignation slowly sliding into soul-wearing sadness, presumably due to his terribly fraught relationship with food, and I actually find it quite poignant. “Don’t mind me, I’m just going to sit here at my desk joylessly eating these indeterminate brown disks that have been sitting in my desk drawer for four hours, cramming them down my maw as I stare off into space, dying inside. See you in a few minutes! I hate myself!” 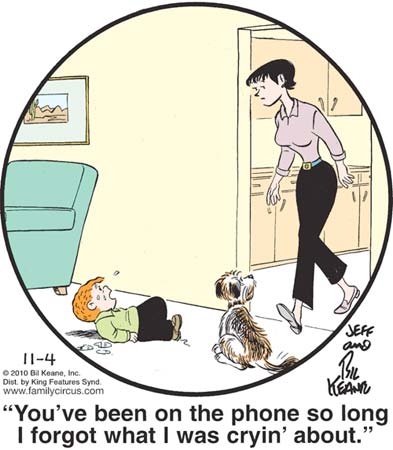 On the other hand, the thought of Jeffy lying on the living room floor weeping ceaselessly while his mother talks on the phone and ignores him is something I find utterly hilarious.

Oh my goodness, Spider-Man is engaged in super-powered combat! Or at least he was, briefly, before being disabled by a swift whack to the thigh with a largish stick. “OWWW” indeed! Our hero has previously been brought low by some dude with a club, a butler with a lead pipe, and a brick, but all of those adversaries allowed him the dignity of swiftly disabling him by attacking him from behind. Mole Man, by contrast, just walked up to him and hit him in the leg. The Amazing Spider-Man!

Jokes on you, crazy taser lady! As was mentioned in passing six years ago and never explained since, the Apartment 3-G girls own your building, so you’ve just confessed your lease violation to your landlord! Tommie’s too wimpy to do anything about it, but she’s also incapable of keeping a secret from Margo — as soon as Margo makes eye contact with her, she’ll blurt out “CAT! MRS. BLOOM HAS A CAT!” — so you’d best take Prissy to Florida with you if you don’t want to find your furniture crushed into a cube and left on the curb when you get back.