I’m a little embarrassed by how much I’ve enjoyed watching Dirk act like a mature (albeit mildly smug) adult while Brad shrieks incoherent threats at him like a furious child over the past few days. As we all know, Dirk can credit his newfound unflappability to Jesus, which makes his gnomic pronouncement in panel one somewhat intriguing. Is the Rapture coming? Has Dirk got advanced notice of the Rapture? Will we be allowed the joy of watching Dirk float triumphantly up to heaven, while Brad’s beady little eyes stare uncomprehending at his ascension?

Good lord, Dick’s spent so much time in the company of hobos, and a significantly larger number of people pretending to be hobos for various incomprehensible reasons, that he’s forgotten the rule of law that he’s sworn to protect. Fortunately, America’s greatest arbiter of morality, Young Richard Nixon, is there to give him a refresher course on right and wrong. 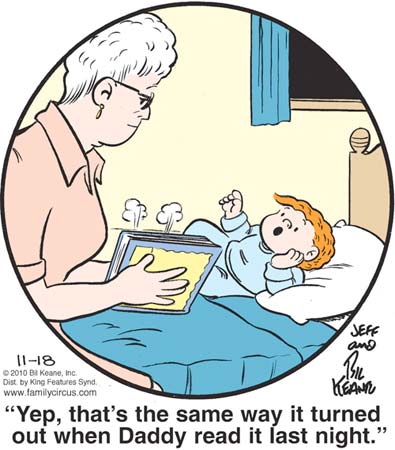 There’s something undeniably hilarious about the insouciant way little Jeffy is lying on the bed, propping up his head oh-so-casually, just waiting to deliver the punchline that will make his grandmother feel like a jerk for trying to spend time with him. It’s OK, Grandma! You can’t make yourself like him, and you don’t have to try! Don’t you have some friends your own age you can hang out with? 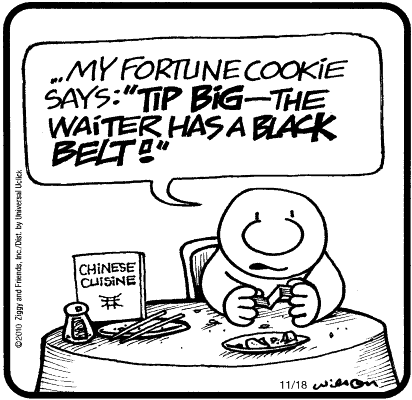 Ha ha! It’s funny because Asians are good at martial arts! Also, Ziggy is going to be brutalized by his waiter.