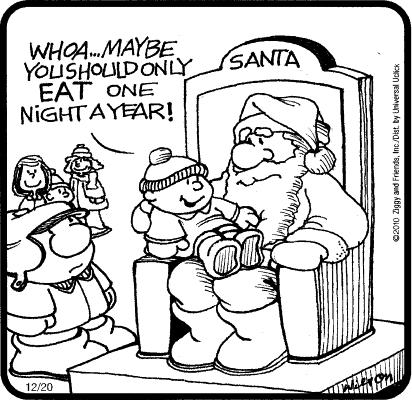 Today Ziggy has gone to see Santa for what’s at least the third year in a row, and we really have to start asking ourselves why he’s doing it. The easy answer is that he’s there for unspeakable reasons involving children, but if there were easy answers to anything involving Ziggy, the strip would have been purged from newspapers, and our collective pop-cultural consciousness, years ago. Here’s my theory: do you notice that the children in all these panels are particularly loathsome and cruel? I think Ziggy has sought out the worst children he can find — perhaps he’s managed to find out when Santa is going to visit the Home For Very Young Delinquents And Sass-Talkers — just to see them insult the jolly old elf. This is Ziggy’s way of pulling himself out of his bottomless pit of low self-esteem. “At least I’m better than these brats,” he thinks to himself. “At least I’m not calling poor Santa fat. I mean, I’m thinking it, but I’m not saying it aloud. That’s the difference between me and them. That counts for something, right?”

Note that Herb is drinking out of his “Herb” coffee mug, while Jamaal is drinking out of a mug featuring the elaborate monogram logo of the soul food restaurant he and Herb co-own, which combines an H and a J. In other words, Jamaal is honoring their friendship and business partnership, while Herb thinks only of himself. This has much more troubling long-term implications for the duo than the personnel changes at the local high school. 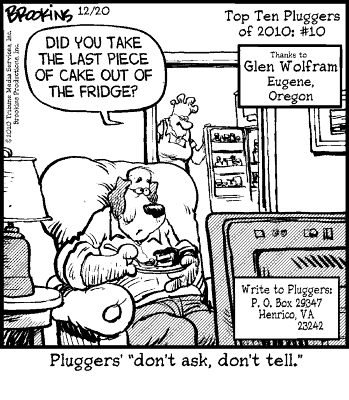 It sure is hard for pluggers to deny the same-sex attractions that shame them so, but somehow the compulsive eating helps them push it all deep down inside, where it can’t get out.

Update: Uh, as faithful reader Ned Ryerson pointed out, I made basically the inverse of this joke the first time this panel ran this year. In my defense, it’s actually a sign of good mental health that I don’t keep an infinite mental file of all the Pluggers panels I mock. I’m still working on the infinite mental file of Mary Worth strips with a team of trained psychiatrists.