Ever since she successfully cured Dr. Mike’s inability to love, Mary’s fancied herself something of an amateur therapist. Today we learn just how far she’s going with her little hobby: she’s apparently developed some extreme form of rational-emotive behavioral therapy where patients use their thoughts to control not only their emotions and attitudes, but their memories as well. “Jill, you were only abandoned by your fiance at the altar because that’s how you choose to remember it! If you simply rethink your memories, then perhaps you’ll realize that he did show up after all, and you’ve been happily married for the past seven years! If you go home and find your house still empty and lonesome, it probably just means that you’re not trying hard enough.”

Notice that Gil actually gives Marty a straight and substantive answer about sports, — in response to Marty’s hesitant attempt to establish emotional intimacy with his long-term frenemy. “Jeez, I’m glad I didn’t tell him that what I wish I had but don’t: recognition from my journalistic peers and my parents of how hard I work on my sportswriting craft. Christ, I feel like an asshole now.”

Hmm, the girls are already dressed in their best party clothes — Margo in an actually rather fetching little black dress, Tommie in her Star Trek: The Motion Picture-era Starfleet uniform, and Lu Ann in [artist’s duty to think of third party outfit avoided by crafty foreground figure placement] — and Iris has gotten out the punch bowl and traditional balloon wreath, and yet this seems to be the first our trio of protagonists have heard of this party. The possibilities: either we’re in the last scene of an ’80s comedy and all Iris needs to do is mention a party to summon the various accoutrements thereof out of thin air while a Journey soundtrack blares in the background, or she was planning on throwing a swell party and not inviting the 3-G gals, a plan they ruined by stopping by unannounced on their way someplace else.

By the way, it’s nice to see that Iris is planning on repaying Mrs. Bloom’s kind offer of a free place to crash by trashing said free place with endless partying.

“Yes, just put your boat near his boat! I am ‘interested’ in being within seeing distance of him! This is because of something I will explain later. It certainly not because I am on a secret government mission, so do not believe that! I am, uh, interested in making sex with him! Yes, that’s it! That’s something humans say, right?” 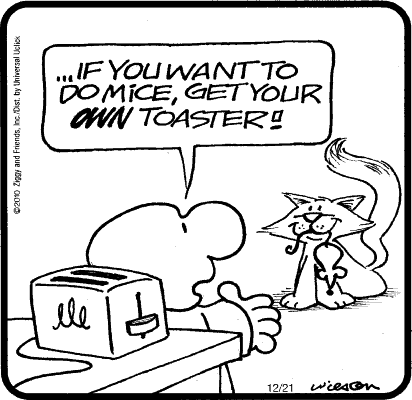 Since the mice in Ziggy are generally portrayed as anthropomorphic wisecrackers, the sight of one dead and dangling limply from a cat’s grinning mouth is fairly startling. What could make this worse? Oh, right, the thought of the stench of searing mouse flesh, the hint of which will always linger on the coils of the toaster’s heating elements! Yes, that will do nicely.

Oh, look, despite a mysterious phone call from his dead wife warning him not to get on his flight, Les did not in fact die in a fiery plane crash. I know, I’m just as disappointed as you are.