Oh my God, you guys, Judge Parker, I can’t believe I’ve been so slack in keeping you up to date on what’s happening in Judge Parker! One of this strip’s less charming M.O.s goes something like this: first it introduces a sexually attractive woman, then it makes her evil, then it destroys her, then everyone is smug about it. Apparently this is getting a bit dull, because in this latest storyline this sequence has played out entirely off-panel, as we heard a whole lot about the sexy publicity lady who was going to make Judge Emeritus Parker’s unreadable book a best-seller and also seduce him, then heard that she had been hit by a bus. And all this without us ever laying eyes on her and learning whether her breasts were ludicrously large or just very big!

Anyway, while we might not get to see our evil temptress, we will see all the rich people who rule the strip being smug about her downfall, because that is the Judge Parker version of the money shot. Look at Sam talking smugly on the phone in his hotel room! Look at Abbey trying to display a shred of human decency, but physically unable to suppress a smirk at a harlot getting her comeuppance! Aaah, that’s the stuff.

Say what you will about Mary Worth, but at least you can’t accuse it of presenting us with sexually attractive characters of either gender. Today’s weird diptych is a case in point. In both panels, the lavender clad ladies on the right are particularly mush-faced and deformed looking, while the orange-shirted gentlemen on the left look marginally more appealing, or at least like non-mutant humans. Thematically, though, the panels are mirror images: Dr. Jeff is making a final push to get Mary into the e-book age, while Wilbur seethes inwardly as his daughter flees the dinner table to eat in her room so she can play Angry Birds on her iPhone in peace. Look at how tightly Wilbur is squeezing his eyes shut! Is he imagining a world where Dawn loves him, and is eager to talk to him about her hopes and dreams as they share the orange spheroids he’s so lovingly prepared?

You might find it baffling that Beetle would consider a joke-telling robot an aid to America’s combat operations, but keep in mind that he’s been in the army over the course of five wars and hasn’t seen combat once, so his ideas of what would “help the war effort” might be a bit off. Also, you might find it strange that “Two young ladies met two guys” could be considered a “joke,” but remember that this is Beetle Bailey, which isn’t funny ever.

Oh, yes, let’s introduce some other seemingly normal lady who wants to have sex with Les, that won’t be gross and distasteful at all. 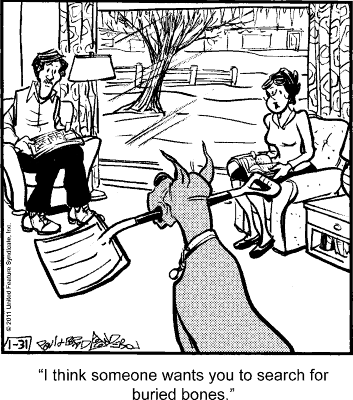 “I think someone wants you to dig your own grave.”