The reasons why the various human and animal characters of B.C. exist and each have their iron-clad associated schtick are now lost in the mists of time. One thing I’ve always found striking is that the ants always get the jokes most closely associated with the heterosexual nuclear family. This is odd because, out of all the creatures great and small who inhabit the strip, ants have by far the freakiest sex lives. Can you imagine the weird dramatic possibilities of actual ant family life, which starts when a newborn queen flies off with a host of her brothers, all of whom mate with her and then almost immediately die, and the queen spends the next several decades giving birth to her sister-children, who toil as her slaves? It would certainly be more compelling than these two talking about divorce plans or whatever. 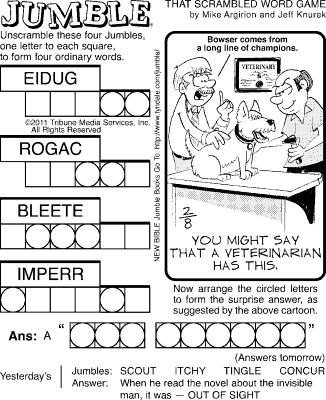 Good lord, I’ve seen few expressions more sinister than the one on that vet’s face as he gently pets that champion pup. What are his nefarious plans for it? You might say he has a “CONNECTION TO A SINISTER UNDERGROUND DOG ORGAN TRAFFICKING RING.”

Oh, hey, it’s been weeks since someone’s life was destroyed in Funky Winkerbean! Here the strip manages to pull of a nice bit of double destruction: Summer’s dreams of basketball glory are figuratively shattered, because the inner workings of her knee are literally shattered. If only we could see the horrified faces of the crowd as they hear that sickening pop!