Whoah, big surprise in Spider-Man today! No, it’s not the fact that newspaper Spider-Man has finally decided to cash in on Twilight mania; that was more or less inevitable. Nor should we be startled by the title character’s braggadocio over his epic sleeping prowess, since we’re all well aware that the sheer magnitude of his laziness is his only distinguishing feature. No, the shocker is that J. Jonah Jameson has decided to transform the Daily Bugle into a British-style tabloid, as we can see in panel two. Unfortunately, on day one the copy desk already used the only Britishisms they knew — “cheers” and “Yanks” and were forced to just slip a placeholding “something” in as the headline’s final word, hoping to cram in some BBC watching in time for tomorrow morning’s edition.

Speaking of the mass media, I’m pretty sure that this is the first time I’ve ever seen ostensible news-bird Cosmo actually perpetrating journalism in this strip. I’m not really sure why he’s filing his story from the Roz’s diner rather than the newsroom, unless the gruesome crime scene he’s describing is actually just off panel, and the characters’ favorite lunchtime spot has become a scene of unimaginable carnage, with corpses everywhere. Gory as the thought is, the strip at least deserves kudos for actually making its bird-world setting integral to the joke, for once.

Barely a year after managing to keep an inarticulate interrogative to himself, Mark Trail has apparently learned how to think exclamations without saying them. Soon he’ll be able to construct a sentence complete with nouns and verbs silently, entirely within his own mind — and then there will be nothing he can’t do. 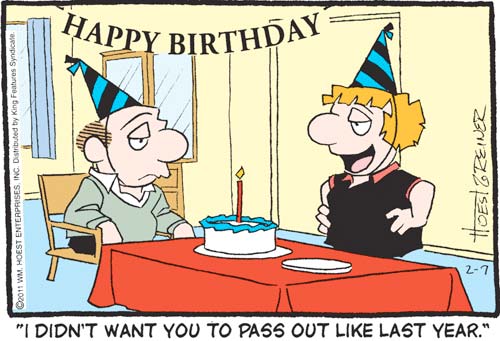