Last week’s big action in Crankshaft consisted of Rose, the ’Shaft’s son-in-law’s senile, unlikable mother, leaving the house out of spite after being told not to do so, and then falling on the ice, with no one around to help her. Apparently this week will be taken up entirely by Rose lying on the pavement, presumably terribly injured, cracking wise (or perhaps cracking senile dementia) as she slowly freezes to death. Crankshaft is, of course, the “light-hearted” Funkyverse strip, so grab your popcorn and get ready for a laugh riot of gradually numbing extremities.

Every day, Lu Ann is discovering another one of the joys of dating the extremely dumb. Today she learns that you can use tired old clichés and they’ll think you’re incredibly smart and witty for coming up with them. My one regret about today’s strip is that there isn’t some audio accompaniment to make clear exactly how badly Paul botches the pronunciation of “curator.”

I’m posting today’s Dick Tracy so you can compare it to Saturday’s and see that, yes, it’s just giving you the same basic information in a different sequence. This happens over and over again, forever, until the sun expands into a red giant, killing everybody. Today’s strip is mainly notable because “doze” is spelled “dose.” Presumably this is because, come on, who the hell would bother to edit Dick Tracy, though it’s possible that Dick is a closet dope fiend and is afraid to shoot up or take goofballs or whatever lest Toasterhead gain the upper hand. (The strip’s previous casual use of drug lingo may be instructive in this regard.) 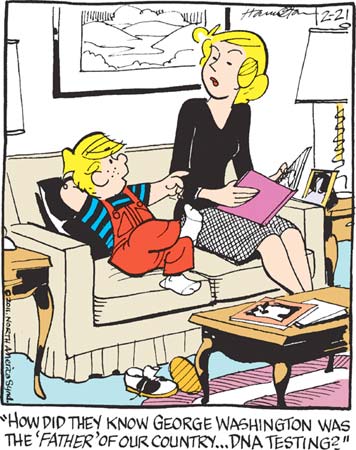