These are the throwaway panels from a dumb Blondie about stores being sold out of snack food on Super Bowl Sunday, but I think on their own they constitute a pleasing vignette about two men who are grocery shopping together, and have gone a little insane. I’m sort of intrigued that, despite “corn flakes” almost certainly being a generic and untrademarkable term at this point, the artist has lovingly rendered a Kellogg’s Corn Flakes box in Dagwood’s hands, in contrast with the unidentifiable stuff around it (note that the pinkish box to the right of Herb is literally just “cereal”). I’d speculate about paid placement, but if Kellogg’s spent real money on this, any ending other than the whole neighborhood eating Corn Flakes in front of the big game and remarking on how delicious and appropriate they are would be unacceptable. 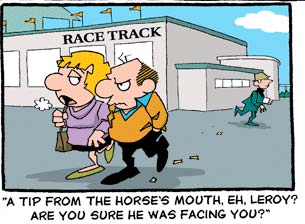 You know, in real life or narrative it generally doesn’t pay to overload your metaphors; most people don’t use “straight from the horse’s mouth” to discuss situations that involve actual horses, as it just makes for confusion. That doesn’t mean we should ignore the punchline here, though, in which Loretta implies that a horse farted and/or pooped on her husband.

Ha ha, it’s funny because a dying Walt is afraid of being tortured forever by the Devil, in hell! Of course, he might not have such worries if he didn’t hold his pastor in such obvious contempt.