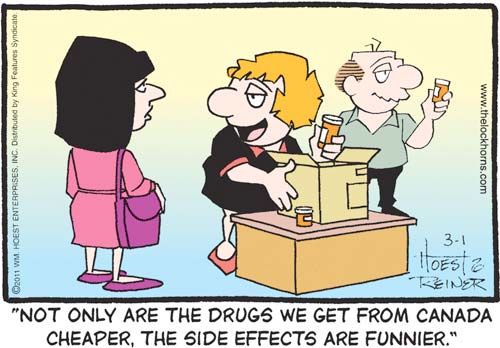 Wow, if you had asked me, “Which comics couple has a whole secret life in which they run pharming parties and ingest massive amounts of bootleg prescription drugs?”, the Lockhorns would not have been my answer. (Connie and Walt from Zits would have been my number one choice, for the record.) I’m pretty sure this is the first Lockhorns panel I’ve seen where both halves of the titular hell-couple are smiling at the same time, even though Leroy’s got the squiggly-smile that is this comic’s shorthand for intoxication of one sort or another. I’m not sure who the anonymous foreground lady is supposed to be, but Loretta is clearly very excited about introducing her to the mind-altering bounty in that box of wonderful pharmaceutical treats from our neighbors to the north.

“Let me tell you something, Wilbur. Your daughter’s lived with you her whole life, so I have to imagine that she’s been forced to watch what I just saw — you inhaling a hamburger right out of your hands, barely pausing to chew — over and over again. So you can’t blame her for developing defensive strategies. I sure wish I had been facing a computer screen instead of facing you when that happened. I kind of wish there were a computer screen between the two of us right now, or maybe just a thick concrete or metal barrier of some kind.”

Aw, isn’t that nice! Remember, whether you’re a prisoner of your job and the low social status associated with it, or just an actual, literal prisoner, you can still escape your bonds and drudgery with the power of your imagination. In this case, the imaginary journey involves macking on sexy ladies, I guess? Seriously, I have no idea what the hell is supposed to be going on here.

The reason we put up with month after month of aimless insanity in Dick Tracy is that, eventually, any given plot will suddenly resolve itself into a brief episode of visceral, nightmarish horror, which remains incomprehensible on any kind of intellectual level but will still be seared into your consciousness, forever. Anyway, as today’s strip features a mass murderer in a gimp mask squirming in terror at the arrival of hundreds of bloodthirsty rats, I think it’s safe to say that this stage of the narrative has arrived.