Oh, look, it’s a new Rex Morgan villain with comical facial hair. I really like the last panel. You can tell that the artist thought it best to only extend our wheelman’s mustache a bit below his lower lip, but the colorist took matters into his or her own hands. “Dude clearly doesn’t do anything halfway, and that Fu Manchu has to go all the way to his jawline. Photoshop, don’t fail me now!”

Yes, most of us would be pretty startled to discover that our reflections were not actually reflecting what we were doing. Dawn’s probably worried that she’s suffering a psychotic break, but maybe in her social networking frenzy she just forgot that that isn’t a mirror at all, but a huge monitor displaying the current DawnCam.com feed. Right now it’s repeating activity from earlier in the night, but her paid subscribers don’t need to know that. 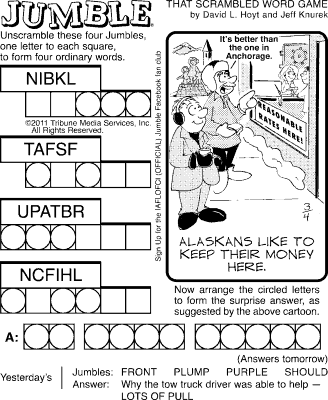 I’m always too dumb to actually solve the Jumble, but I don’t need to today because the answer is obviously “a snow bank.” Now just to fill in the circles and … hey, wait a minute … DAMN YOU JUMBLE!

So … being a lawyer in Hootin’ Holler involves throwing rocks at people? Yeah, that sounds about right, actually.