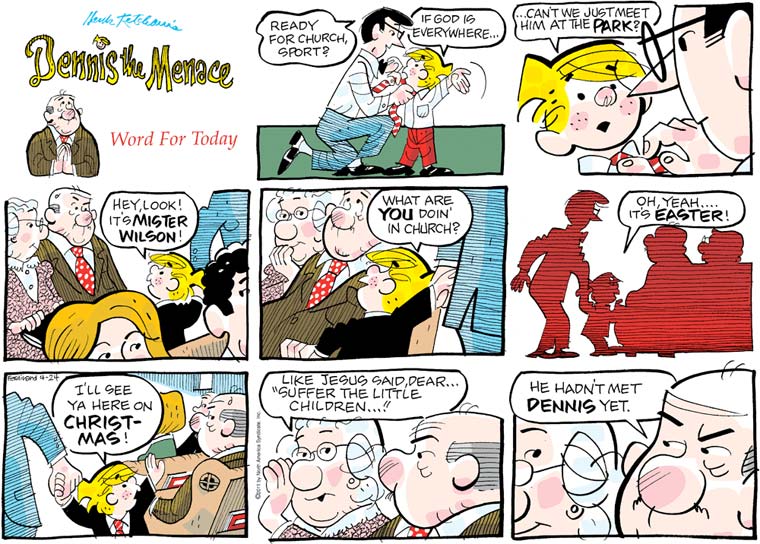 Let’s start Easter with a little bit of theology! In the throwaway panels, Dennis appears to flirt with a rejection of the idea that a human institution is necessary to mediate between humanity and God. Nevertheless, upon actually going to church, he proceeds to taunt Mr. Wilson over the latter’s spotty attendance over the year. Mr. Wilson fumes nastily over the wrath that Dennis will encounter on the Day of Judgment. The conundrum thus proposed seems to be: Whom would God favor? One who, like Dennis, offers worship to the Lord in the approved fashion, only to go home and wreak all kinds of devilish mischief; or one who perhaps does not take communion that often, but who at least upholds the divine commandments, if only because of his sullen refusal to leave his house or do much of anything else? Mr. Wilson can take comfort in I Samuel 15:22: “And Samuel said, Hath the LORD as great delight in burnt offerings and sacrifices, as in obeying the voice of the LORD? Behold, to obey is better than sacrifice.” Since the obedience under discussion here was a divine order to exterminate the tribe of the Amalkites, this should dovetail nicely with that killing spree one assumes the tightly wound Mr. Wilson has planned.

Speaking of theology, our minister here should perhaps spend more time working on his metaphors, as I don’t think it’s really a good idea to compare God to the collapsing airline industry, which has cut back on the little perks of flying, charging nickel-and-dime fees while cramming ever more passengers into aging aircraft; the monopolistic utility corporations, which belch pollution into the air while jacking up electricity rates; or to prescription medication, often rushed to market by profit-driven megacorporations with deadly results. I guess people like greeting cards and scotch tape alright, though, right? I mean, not enough to worship them or anything, but still.

If you were somehow worried that the new author-artist team behind Dick Tracy would downgrade our daily dose of violence of horror, I think you can rest easy now. Baddies vaporizing cops while declaring that they love “roast pig” isn’t even the most unsettling thing on display today; that honor of course goes to the terrified medical personnel fleeing whatever nightmarish creature longtime Dick Tracy fixture B.O. Plenty (reading Spittoon Quarterly, God bless him) has sired on his poor wife.