This latest plot development may be more weighted down with grim Funkyverse backstory than any we’ve yet encountered. For those who don’t keep up, or who continually purge Funky details from their mind so that they can continue to feel pleasure: the blond dude is Darrin, who was the baby Les’s sainted dead wife gave birth to as a teenager and gave up for adoption. His blonde wife is Jessica, whose father was a newscaster and the star of John Darling, a strip that Tom Batuik created with Marvin auteur Tom Armstrong; the strip was cancelled and was wrapped up in hilarious fashion when a crazed gunman murdered Darling. Later, back at the Funky mothership, Les solved the murder and made it the subject of his first book, which was a complete financial flop. Fun!

Jessica and Darrin somehow managed to escape the awful gravitational pull of gloom that is Westview, but are now returning voluntarily because Jessica wants to make a film about the death of her father, which will presumably do about as well as Les’s book. Anyway, the best part is that they have to live with the Moores (because everyone in town is far too depressed and/or cancer-ridden to build new houses) and Darrin will have to get a job at Montoni’s (because it’s literally the only functional business within a fifty-mile radius that doesn’t require an MD with an oncology specialization as a prerequisite of employment). 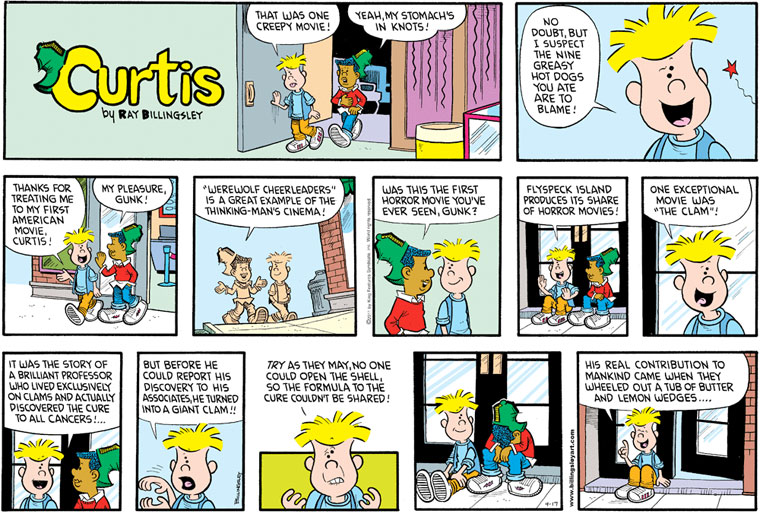 I fine it hard to believe that Gunk has, in all his years of paling around with Curtis on the comics pages, never been taken to an American movie. But I’m even more baffled that horror connoisseur Curtis can’t see the potential in the movie plot Gunk outlines. A respected scientist is transformed as a result of his obsession into a grotesque, enormous mollusk — a monstrous nightmare-thing that, in an appalling twist, his insatiable colleagues consume alive? The visceral horror combines with allegorical themes to make Flyspeck Island a shoo-in as winner of next year’s Best Foreign Language Film Oscar. (Wait, do they not speak English on Flyspeck Island?) 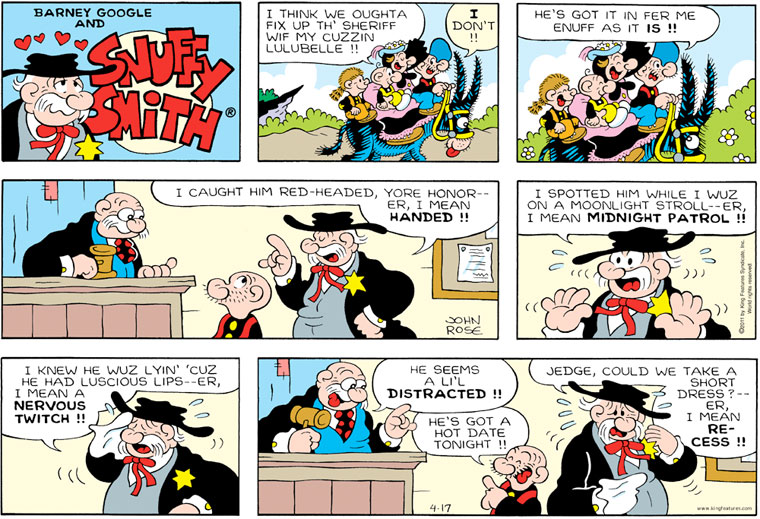 Perspiring visibly, the cop was so fixated the sordid sexual encounter he had planned for the evening that he couldn’t focus on his job! Sordid R-rated film starring Harvey Keitel or Nicolas Cage … or wacky comic that appears in family newspaper around the country?