One wonders why today’s Wizard of Id, having annotated with blunt-force onomatopoeia actions in the first two panels that would have been easily parsed as drawn without explanation, then goes on in panel three to illustrate … something … with a series of mysterious radiating lines. Are these supposed to represent light — a glow from within the bathroom, along the lines of the nuclear whatsit in Kiss Me Deadly, or a more abstract representation of the gargoyle’s shocking ugliness? Do they indicate sound, perhaps the gargoyle’s inarticulate shrieking? Or, considering that the magical beast has been interrupted on the toilet, maybe they’re stink lines? They’re stink lines, aren’t they? Since that’s the grossest possible answer, I’m going to assume that’s the case.

My favorite part of this strip is not the fact that Paul caught the bouquet (although it does make one smile to imagine his bridesmaids’ dresses, just as hideous in design as the one Lu Ann has on now, only they’re the same hideous orange creamsicle color as his suit), but all the single ladies flailing wildly about in the background, a full ten yards from anywhere the bouquet could have possibly landed. It’s like they’ve all been turned off marriage forever by the horrorshow before them, but feel they need to participate in this antiquated patriarchal ritual, for appearance’s sake. 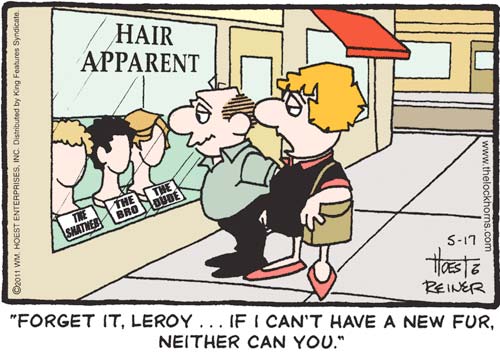 Who says the Lockhorns is out of touch? It takes someone with a near anthropological understanding of the nuances of modern American life to grasp the distinction between a “dude” and a “bro.”

Gosh, it looks like the whole rest of the week is going to be dedicated to the funeral of poor cuzzin Travis. Today, the town preacher implies in front of Travis’s whole family that he’s being tortured forever, in hell!