Oh boy, this bespectacled lady wants to capture Spider-Man, in photographic form! This is delicious, because of course taking pictures of Spider-Man is, as far as I can make out, Peter Parker’s sole source of income. One of Newspaper Spider-Man’s least attractive qualities — and lord knows there are lots to choose from — is his continuing macho panic at the idea that his wife makes more money than he does, despite the fact that his wife is a successful actress and he’s a stringer working in the dying newspaper industry (and also a superhero, a role that you’d think would be enough to boost his fragile ego, until of course you see how he goes about filling it). Anyway, my bet is that this woman will humiliate Peter further by displacing him from his pathetic job; I assume that her pictures of Spider-Man will be better than his, both because it’s tricky to stage photos of yourself and because Peter is an incompetent who’s no good at anything.

Haw haw, looks like Jughaid’s startin’ to hallucinate! He’s probably sufferin’ from heat stroke, no doubt because he insists on wearing a fur hat in the middle of summer. 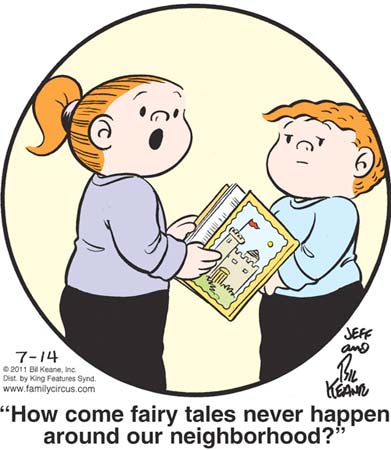 Dolly, nothing in your current life might match up with the sanitized fairy tales in that book, but surely the Brothers Grimm or Russian folklorists have recorded stories of a quartet of terrifying, stunted gnomish things locked away in a compound by their horrified parents.

This is the first Hi and Lois I can remember laughing at. Ha ha, it’s funny because the innocent little baby is learning about disappointment! Oh, I’m a terrible person.