So a few days ago, Marvin featured a strip that went something (I’m not even going to check the archives to get all the details right, that’s how much I resent thinking about Marvin over multi-day spans) like this:

[Marvin’s parents are looking at Marvin while he’s asleep.]

MARVIN’S MOM: Oh, Marvin’s dad! Doesn’t our awful poop-baby look adorable, when he’s asleep and not moving or making noise, or pooping? It makes me want to have another baby!

I figured this was nothing more than another attempt to make a joke out of the fact that Marvin is such a loathsome baby that even his parents hate and fear him, and live in terror that they might bring another like him into the world. However, apparently it has set up the actual conception, incubation, and birth of a new Marvin-sibling, all over the course of only a few days. Did the Marvin franchise need shaking up to this extent? Eh, well, it can’t get any worse, so why not? (Unless we learn in a week or two that this seemingly major change was all dream. That will be worse.)

Oh, man, when I analyzed Monday’s Funky Winkerbean, I obviously wasn’t prepared for the multiple layers of smugness we were in for. Les didn’t smugly display his superiority over his old professor; instead, he refrained from this act of petty taunting, so he could come home and wax smugly about his moral superiority. Kudos to you, sir! 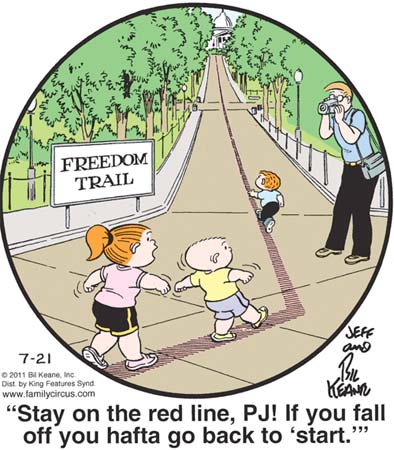 I’m reasonably sure that this week’s “Keane Kids trash Boston” strips are repeats from several decades ago, which would explain why the camcorder Big Daddy Keane is holding in front of his face looks so awkward and out of place and pasted-in-later-y. Presumably it was put in to cover up the circa 1962 Nikon F Photomic he was using in the original? Honestly it looks more like a canister that he’s huffing paint out of, and really, who can blame him.