The Judge Parker cast is so uniformly and repulsively wealthy — look, Sam and Abbey are walking past the enormous pillars on the front of their house, built to a scale previously only seen on the palaces of the most decadent Roman emperors, and are trying to figure out something pointless they can buy with the yet more money that’s being thrown at them — that the only reason I can keep from hating them utterly is because I’m amused by their sexlessness. Oh, it may look as if Abbey is going to successfully woo Sam up her giant dominatrix staircase and have her way with him, but don’t worry, someone will pass out or something, maybe because of the fumes coming off all the freshly printed $100 bills that they have lying around.

Mary of course hates and fears the Internet, which will stop her from offering Gina the most obvious piece of advice for her situation, which is of course that she should look her dumb old childhood sweetheart up on the Internet to find out if he’s single or not. “That certainly is a tragic story, dear. Say, why don’t you call up that gentleman who gave you his phone number the other day? He doesn’t seem like an unrepentant sex offender.” 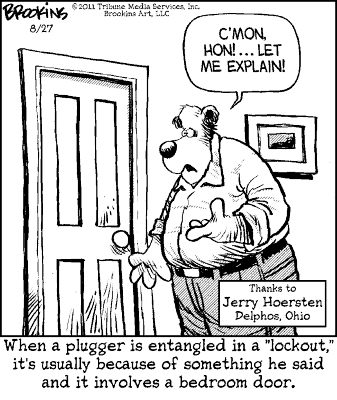 Pluggers wouldn’t dare disobey their corporate masters, but they sure seem to piss off their wives a lot.

Hey, everyone, I’m out of town for a brief break — Sunday and Monday comics will go up Monday evening sometime.