It took me a moment to figure out that Baldo is supposed to be embarrassed by his family’s ludicrous outfits. I at first assumed that his father subscribed to some religion that operated in a way that was exactly the opposite of most religions and actively opposed shame on general principles. “Baldo, why do you cover your thighs with your sinfully long shorts? Why do you not show the world your package, like I do in my Speedo? It’s what God wants!”

You probably don’t remember, what with the exciting last four months of Judge Emeritus Parker getting everything he wants with no effort on his part, but our gal Sophie has a bit of a romantic conundrum, what with there being a boy that she wants but can’t have because he likes some other girl better. Abbey urged Sophie to study the problem in her analytical, borderline Aspergers way, and now she appears to have come up with a solution. Doesn’t she look like a happy young girl in love with a plan to win over the object of her affection? Sure, if taking out the young man and his girlfriend and all of her other classmates in a hail of bullets counts as “winning.”

I’m delighted by how much grown-up Gina’s head in panel one looks exactly the same as little-girl Gina’s head in panel two. I certainly hope that whatever family drama we’re about to see unfold involves her parent’s secret horror and disgust at their daughter’s adult skull, perched unnaturally atop her child’s body.

That dinner scene sure is an accurate depiction of life in a cramped New York apartment, what with everyone sitting around four inches from various items of bedroom furniture. 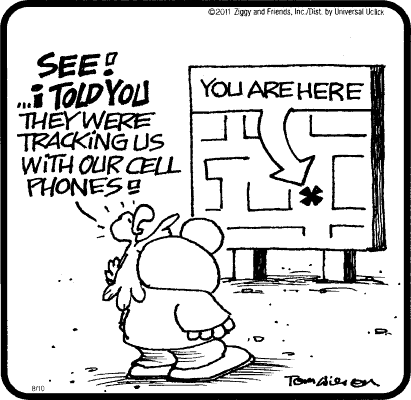 I was about to make some comment about how Ziggy’s parrot is a paranoid schizophrenic, ranting about how “they” were secretly tracking his every move, but then I realized that it’s really much more likely that Ziggy’s the crazy one, and this is a Son of Sam like situation. “No, he’s the one who told me that they were CIA agents! He’s the one who told me they had to die! Say something!” “SQUAAAAK” “See! See!”

Sorry I haven’t been keeping you up to date with the pulse-pounding action in Gasoline Alley! I’ve been nervous that it might just be more excitement than you can handle.