Let’s start our discussion of Tuesday’s comics by looking at the first panel of Monday’s Apartment 3-G: 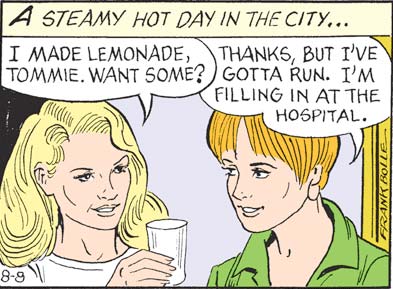 Sorry Lu Ann, looks like you’re left holding the glass! Wait, don’t you have another roommate? Maybe she wants lemonade!

Do you think that’s the same glass? I sure hope not, for Lu Ann’s sake. Margo doesn’t want your hand-me-down leftover glasses of lemonade, Lu Ann! Margo only wants the freshest lemonade! And Margo couldn’t possibly want anything Tommie has rejected! What’s the matter with you?

Fortunately for Lu Ann. Margo is mostly ignoring her as her mind is firmly set on her next round of harebrained schemes. Still, our lovable dim blonde sure is hilariously sad by the end of the strip! “Doesn’t anyone need me? Making lemonade is my only skill! If nobody ever wants lemonade again, what will become of me?”

Ha ha, remember when a Ben Franklin lookalike hustled Marty Moon out of hundreds of dollars on the links? That was all good fun, since Marty is everybody’s punching bag, but having the strip’s ostensible authority figure and voice of reason high-five his protege after a successful revenge-grift seems somewhat more problematic. 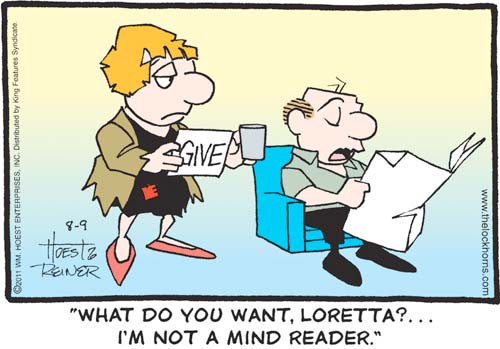 C’mon, Leroy, it’s Tuesday, aka “sexy hobo cosplay day.” You know what Loretta wants. Unless … this is part of the game? “Fine, let me just finish the paper, and then I’ll put a little something in your cup, if you know what I mean.”

That tiny question mark in the final panel isn’t a sign of self-doubt or a signal that Mary isn’t sure what her next move should be (ha ha, like she would ever experience such things). Rather, it’s indicating her sudden disorientation. As soon as she hears the words “I need your advice,” the world seems to retreat away from Mary, appearing as a tiny pinprick of light at the end of a long tunnel, as she enters a fugue state. She’ll come to three months later, covered in blood, just in time to watch Gina’s newly de-estranged father walk her down the aisle.