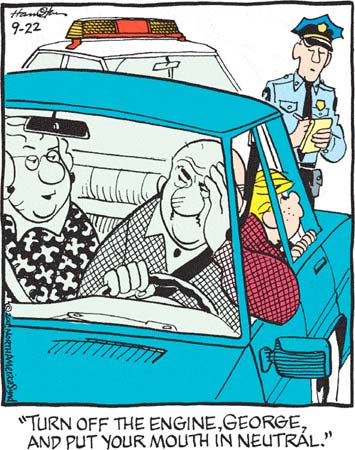 Mrs. Wilson knows she needs to calm her radical anti-establishment husband down if this encounter is to end without violence. “Now, dear, you and I both know that 911 is a joke, but there’s no need to call him a pig to his face. You’ll just get tasered in the neck again, and I don’t think your heart can take it.”

Wow, that’s quite a large amount of cash that Sam and Abbey can just pull out of their bank account on a whim. Do you suppose that all subsequent Judge Parker storylines are going to be more and more transparently about the Spencer-Driver clan’s wealth? Will every strip in April of 2012 just consist of the two of them sitting around counting out hundred-dollar bills, pausing only to occasionally blow their noses into them?

Despite my burning and irrational hatred for Marvin, I have to admit I feel a twinge of sympathy for him in the second panel. Look at his growing sense of panic as he learns that, as his life draws to a close decades from now, even the joys of eating will elude him! Quick, someone tell him something reassuring about old age, like that he’ll finally be able to start wearing diapers again.