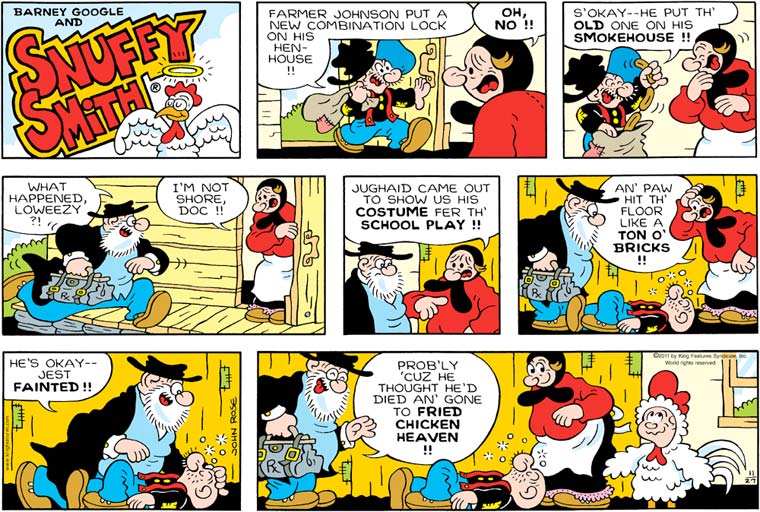 The throwaway panels of today’s Snuffy Smith shed light on a perennial interest of mine and nobody else’s: the economy of Hootin’ Holler. Though I’ve never spotted him as one of the strip’s cast of characters, apparently “Farmer Johnson” lives in this blighted hamlet, attempting to make a living from agriculture. Since the chickens and sausage he produces are invariably stolen by his parasitic neighbors, one wonders why he hasn’t pulled up stakes long ago, or at least given up working hard like a sucker.

If anything, the rest of the strip is even more unsettling, in that we learn that Snuffy, had not his neural circuits been overloaded by visions of chickeny pleasure, would have killed and devoured his hapless nephew. Jughaid’s pleas for mercy would have only registered in Snuffy’s mind as clucks as the thieving hillbilly lived out his great fantasy of eating an enormous angel-chicken. I assume the first throwaway panel depicts one of these divine fowl, which leads us to a sad question: Are chickens killed, dismembered, fried, and eaten, even in chicken heaven?

C’mon, Crankshaft, there’s plenty of room for another word-balloon lobe there, so why not end Ed’s musings with “…and, finally, your coffin?” The general vibe of the Funkyverse would seem to demand it. I mean, I’m assuming the family is intending to wall up their hated matriarch in that room Cask of Amontillado-style anyway. 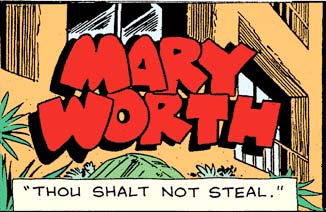 We’ve had a few thousand years of YHWH trying to guide our morals, but we haven’t really taken the lessons to heart. A much crueler God will be handing down the commandments from now on.