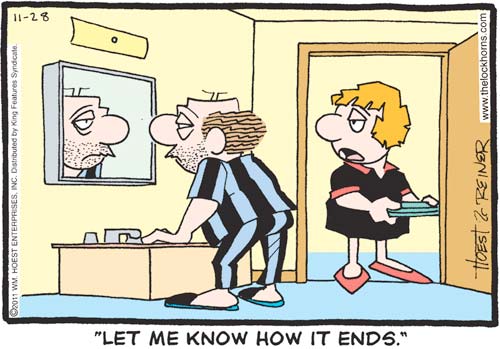 My goodness but this is a delightful Lockhorns! I’m not entirely sure what’s supposed to be happening here, but since Leroy is in his pajamas and looks miserable and ill, while Loretta is already up and about and dressed and carrying something indistinguishably horizontal, I’m going to guess that he’s been staring at that mirror for hours now, trying to decide whether or not to follow through on his drunken boast from last night that he was going to kill himself. “Let me know how it ends!” Loretta says cheerfully, fully aware that if he doesn’t have the courage to end his awful, soul-crushing marriage, he certainly doesn’t have the guts to finish himself off.

Way back in the mists of times, Gil Thorp plots ended in wacky hijinks and weird psychological ploys, but apparently someone decided that this wasn’t realistic enough, so now Gil solves his problems like a real high school football coach would: by ignoring them until it becomes clear that they won’t go away, and then yelling at people. Last year’s great budget cut debacle concluded when Gil showed up at a school board meeting and dragged his enemy’s private life into public scrutiny; now he’s just straight up humiliating the president of the team booster club in front of his buddies. Presumably everyone else will literally fall in behind Gil, now that the true alpha male has been identified.

In this Archie rerun from the mid-1990s, Ms. Grundy worries about the teenage pregnancy epidemic (not that we’ve ever seen a pregnant teenager in Archie, but I guess she has a TV set). Well, don’t fret, long-ago Ms. Grundy! Over the next decade and a half, teen birth rates will plummet, eventually hitting their lowest point since the 1940s. Teens continue to not use pins as tokens of affection, though, if you still want something to complain about the kids today.