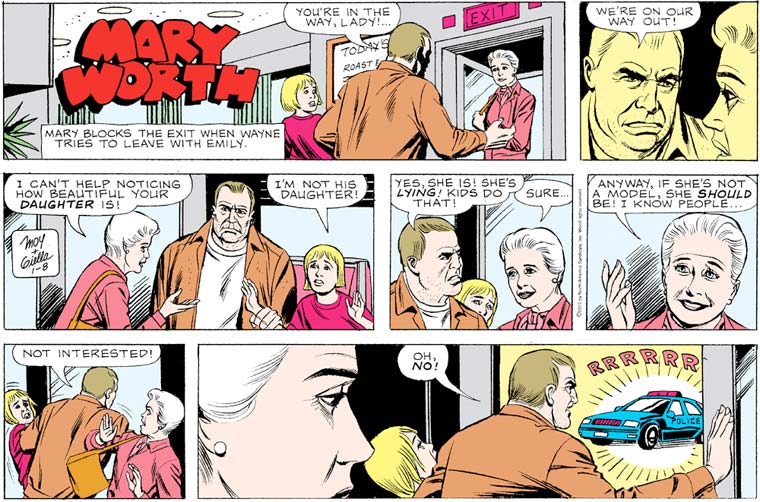 I swore a blood oath to myself that I wouldn’t discuss Mary Worth until something happened, and now something has, so here you go! Anyway, Mary has proved herself history’s greatest hero by physically blocking the door briefly to give the cops long enough to arrive and apprehend our kidnapper. Bonus points for really trying to get into the depraved criminal’s head with her “That young girl you’ve kidnapped sure is attractive, you’ve definitely made the right choice there” technique. Look for Mary’s sense of self-regard to reach levels that scientists had hitherto believed to be impossible. 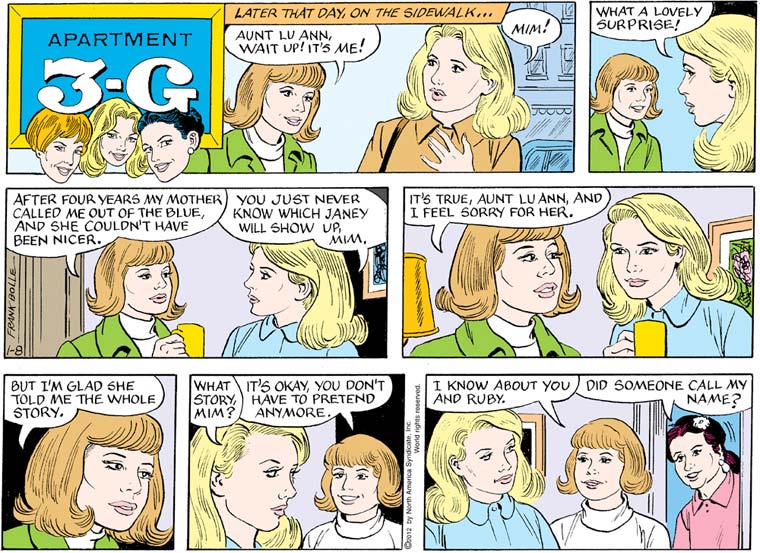 Oh my goodness you guys, is … is Ruby Lu Ann’s biological mother??? Who maybe got knocked up as a teen and handed over the child to her aunt and uncle to raise? Causing resentment in said aunt and uncle’s biological daughter, and, eventually, in said aunt and uncle themselves? Does this explain the weird family dynamic, and why Ruby showed up in New York a few years ago acting all maternal-like towards Lu Ann? Will Lu Ann and Margo finally find something to bond over (i.e., their sordid, secret parentage), leaving Tommie, presumably the biological child of the married adults who raised her, even more boring and left out than usual? 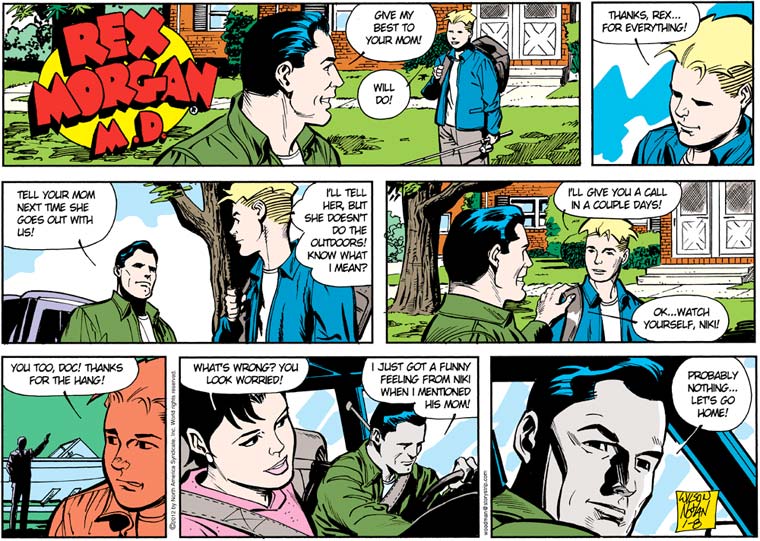 Rex Morgan’s sexy rebellious teen plot has ended with a thwarted rape attempt and a mother-daughter reconciliation (i.e., it ended extremely not sexily), but I do have vague hopes for what’s coming next. Remember, Niki’s mom was a former meth lab tech who Rex hired to work in his clinic and who hasn’t been heard from since. I share Rex’s sense that “she doesn’t do the outdoors” is code for either “she’s in the middle of a six-week cross-country crank-fueled bank robbery spree” or “she’s been dead for weeks and I keep cashing her public assistance checks.” I was going to say that Rex ought to know more details, since he’s her employer and all, but then I remembered that Rex really doesn’t care about other people enough to pay attention to them.

I know I usually only put up cartoons to make fun of them, but I really love today’s Six Chix! I especially like (a) the fact that only one third of the book group hated this week’s read enough to burn it and (b) that even in their rage these ladies made a makeshift fire pit, possibly out of the top of a barrel, rather than just burning the books in the middle of the floor. There’s no need to make a mess!