For far, far too long we Mary Worth trufans have been denied the Charterstone Pool Party that is our due. And now, it seems, we’re getting one with a vengeance. People lounging around in various hideously colored and patterned outfits? Check! A lonely Wilbur loading up a plate with earth-toned blobs of food-esque material? Check! Mary and Toby furiously gossiping about Nola Wolverson, well known local sex-hussy? You’d better believe that’s a check!

Even better than Mary and Toby sniping about what a whore Nola is (what sort of woman with a boyfriend would try to steal another woman’s husband? everyone knows that’s a single gal’s prerogative!), and indeed even better than Toby’s delusional belief that someone, anyone, might actually try to steal Ian from her, is the fact that Nola’s man-hunting actually refers back to one of the greatest plotlines in recent memory, The Erotic Adventures of Delilah. Delilah almost strayed from her marital vows before she realized that sex was gross, and so she got back together with Lawrence, culty motivational speaker husband and made a baby with him instead. Good times! Anyway, as much fun as it would be to delve back into Delilah and Lawrence’s sexual psychodrama, I hope the real direction of this next storyline involves Toby’s doubts about her own marriage, since nothing could be as delightful as the Camerons in emotional turmoil.

My God, can you imagine the moral dilemmas that confront an exterminator in a world of sentient animals? And this guy’s a rat, so half the time people are probably paying him to massacre his own relatives. Presumably he found the offending bats and told them, “Look, the squirrel downstairs wants you dead, I don’t know why! Clear out as fast you can, I’ll feed her some bull about eggs or something. Just go! GO!” But no, Slylock is here to impose the iron-clad Law of the Wild: You take someone’s money to murder someone, you’d damn well better murder them.

You’d think, with all the complaining I do about it, that I’m 100% opposed to modern-day Funky Winkerbean’s weird vibe, where the current depressing, realistic mood is slathered over a base layer of cheerful wackiness. You’d be wrong, though! I do occasionally like the strange tonal mismatch that results. For instance, our “wacky neighbor” character here (he is actually named ‘Crazy’) says something silly that in zany-world would get a laugh from the audience, but instead our redheaded waitress recoils in confusion and distaste, just as someone would in real life. 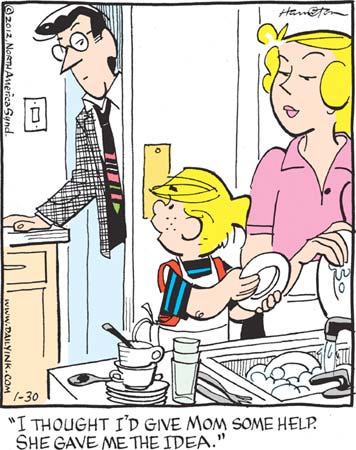 Now I know what you’re thinking: There’s literally no way to be less menacing than by helping your mom do the dishes when she asks you to, right? Oh, I don’t know, I’m guessing that the conversation before dad showed up went something like this: “Sure, mom, I’d love to help you do the dishes. It always seems like you’re doing them yourself. Why doesn’t dad ever help? Mostly he just watches TV after dinner, but how important can TV shows really be?” BAM. The seeds of discord are planted. Advantage: Dennis.