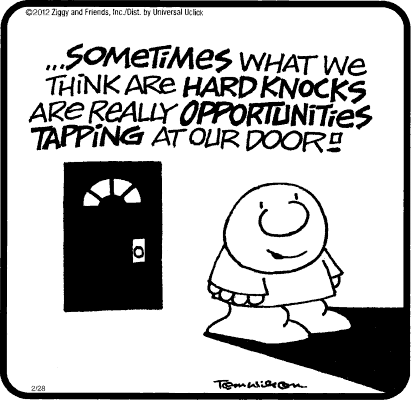 That’s true, Ziggy! It’s also true that sometimes that door is an inky black portal radiating evil so powerful that it somehow, incomprehensibly, casts a shadow, and that it doesn’t lead to opportunity so much as to an awful hell-dimension full of soul-devouring demons. KNOCK. KNOCK.

Pluggers know that if things really get bad, well, old Jed down at the pawn shop has a pair of pliers, and a few hours of pain should pay the rent for another month or two.

Did you know that “druthers,” as in “If I had my druthers, the characters in Barney Google and Snuffy Smith would keep their tongues in their mouths instead of letting them flap about obscenely,” is actually a contraction of “I’d rather”? It’s true! Today’s Snuffy Smith sent me on an etymological voyage of discovery, which is a sentence that I’m pretty sure has never been written before and will never be written again.

Aw, that bluebird looks awfully sad! Probably because the squirrel has just told it, in so many words, that it’s going to starve to death.