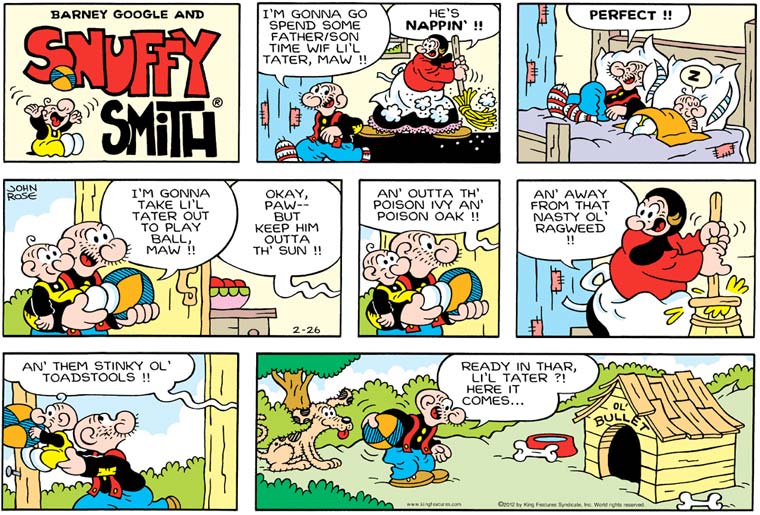 I had always hoped that, if there were anywhere in America where the bane of helicopter parenting had yet to arrive, it was Hootin’ Holler. And yet here we have the Smifs hovering intrusively over their toddler instead of just letting him engage in the sort of non-supervised play in a trash-strewn backyard that made Americans from previous generations healthy and strong (those that survived, anyway). My one consolation is that Snuffy is still pretty bad at this, having stuck li’l Tater in a dog house that’s almost certainly filthy beyond description. 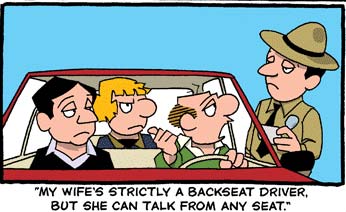 I suppose that Loretta needed to be in the back seat in order for this joke to work (to the extent that you would consider this a “joke” that “works”), but that still doesn’t solve the mystery of who this grim-faced fellow is in the front seat. He sort of looks as he’s being driven somewhere by the Lockhorns to be done in execution-style and dumped in a shallow grave, but if that were the case he’d probably be happier to see this cop, so I’m assuming that he’s just listened to them talk for 15 or 20 minutes and has now completely lost his ability to feel joy.

It seems that Rodney Rat has graduated from eager teenage grifter to “career criminal,” with sunglasses and everything. It makes me a little sad that he’s hit this elevated status in his criminal trajectory while his much awesomer relative Reeky is left back in the small time. I also question the practicality of the rope-lasso as a prisoner-retainment device, which may help explain why Rodney gets to make a career out of his criminality.

Mary, no! You don’t have anything to prove to her! YOU’RE LETTING HER INSIDE YOUR HEAD!